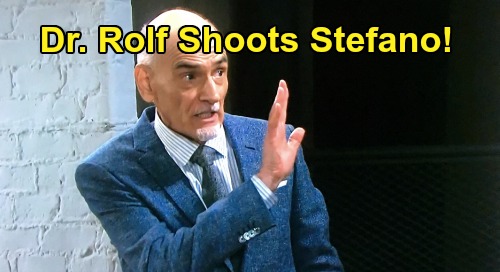 Days of Our Lives (DOOL) spoilers tease that Stefano DiMera aka “Steve Johnson” (Stephen Nichols) will need some help from a trusted ally. You’d think Dr. Wilhelm Rolf (William Utay) would’ve turned against Stefano by now! Stefano threw Dr. Rolf under the bus by having the security footage altered. He framed Rolf for Jennifer Horton’s (Melissa Reeves) attempted murder, but it was nothing personal.

Stefano simply had to protect the real culprit Princess Gina Von Amberg aka “Hope Brady” (Kristian Alfonso). He needed Princess Gina’s assistance and couldn’t risk her going to prison – even as “Hope.” However, Stefano still values Dr. Rolf and probably likes him even more now that he took one for the team.

It turns out Dr. Rolf, who’s on the run, will pop up in Europe. He’ll once again be called to help with a twisted DiMera plot. Days spoilers say “Steve” will rope Dr. Rolf into shooting him, but it’ll just be an elaborate charade for John Black’s (Drake Hogestyn) sake. The incident will be one big fake-out.

Stefano will explain his crazy plan to Dr. Rolf beforehand, so he’ll share his motives. He’ll feel like he needs to leave John feeling distraught and vulnerable. Stefano intends to hand John over to Princess Gina later, so he’ll think this will leave John in a troubled emotional state. That’ll work out well for Princess Gina in Stefano’s opinion.

Stefano will think John needs to watch his best friend get murdered right in front of him! That’s where Dr. Rolf comes in. Days of Our Lives spoilers say Dr. Rolf will follow orders and seemingly pump a bullet into “Steve.” As DOOL fans might expect, “Steve” will give a very dramatic performance.

Days of Our Lives spoilers state that John will be shocked by the scene that unfolds, but he won’t have much time to react. John will be bashed in the head and knocked unconscious soon after. That’ll leave John ready for the next phase of Stefano and Princess Gina’s wild scheme.

It sounds like the excitement’s revving up on the NBC soap. We’ll give you updates as other Days news comes in. Stay tuned to DOOL and don’t forget to check CDL often for the latest Days of Our Lives spoilers, updates and news.