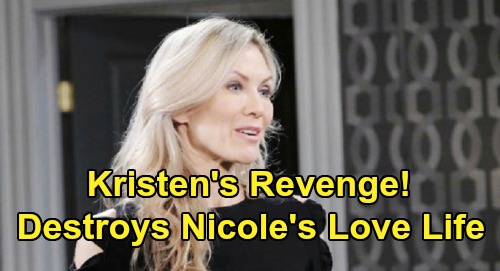 Days of Our Lives (DOOL) spoilers tease that Kristen DiMera (Stacy Haiduk) will grow closer to Brady Black (Eric Martsolf). After all the time jump flashbacks wrap up, it’ll be back to business as usual in Salem.

Brady and Kristen will mourn their loss in the present. They’ll still feel the deep ache of losing their child, but we know their baby girl is actually alive and well.

Kristen and Brady will find out about Xander Kiriakis’ (Paul Telfer) baby swap eventually, but let’s focus on their relationship for now. Although Kristen will be pleased by these bonding moments, she’ll still feel like Nicole Walker’s (Arianne Zucker) a major obstacle.

That’s because Nicole and Brady are faking a relationship to keep Kristen at bay. It was Nicole’s idea, but she may regret it soon enough. Days of Our Lives spoilers say Kristen will manage to blow things up for Nicole. She’ll blab to Eric about this “Bricole” reunion and how they’ve been flaunting it right in front of her.

DOOL viewers can expect Eric to feel betrayed for so many reasons. For starters, Eric thought he was done battling it out with Brady over a love interest. He didn’t think Brady would pounce on Nicole the moment he left town – especially while he was dealing with Mackenzie “Mickey” Horton’s cancer.

However, it’ll be Nicole’s betrayal that stings the worst of all. Nicole implied that she’d wait for Eric to forgive her, so he’ll be hurt that she chose to reunite with Brady instead. Of course,

Days fans know that’s not what’s going on here, but Eric may not give Nicole a chance to explain. At least not before he seeks comfort from someone else!

There’s no word yet on who that someone might be. It’s possible Eric will lean on somebody in a completely platonic way. It’s also possible it’ll be something romantic in nature.

Regardless, Days of Our Lives spoilers say Eric will find a shoulder to cry on. Nicole should be upset when she realizes her plot’s gone awry – particularly if Eric leans on Sarah Horton (Linsey Godfrey) or another woman.

It sounds like the excitement’s revving up in Salem. We’ll give you updates as other Days news comes in. Stay tuned to DOOL and don’t forget to check CDL often for the latest Days of Our Lives spoilers, updates and news.