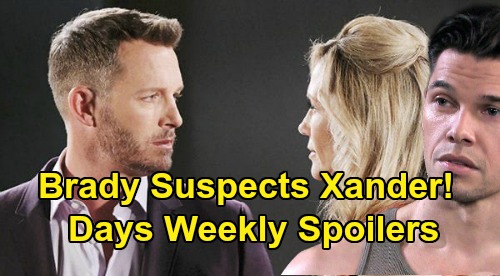 Days of Our Lives (DOOL) spoilers for the week of January 27-31 tease that some shockers and shakeups are brewing. We should note that although preemptions are happening for many DOOL fans, the impeachment trial won’t push back any episodes. Days will keep moving right along, so you can always catch up online – or at least follow along with our spoilers and other info here at CDL.

Now let’s get to all the action happening during the week of January 27-31. For starters, Will Horton (Chandler Massey) will spar with Ciara Brady (Victoria Konefal) about their next move. Once Will hears the whole story of how Maggie Kiriakis (Suzanne Rogers) killed Adrienne Kiriakis (Judi Evans), he’ll consider keeping the secret.

Ciara will undoubtedly want Will to rejoin his family and find freedom instead. Speaking of freedom, Sonny Kiriakis (Freddie Smith) will make the most of his now that the divorce papers have been signed. He’ll strengthen his connection to Evan Frears (Brock Kelly), but Evan’s dark secrets clearly spell trouble.

Other Days of Our Lives spoilers say Kate Roberts (Lauren Koslow) will suddenly grow fearful. She’ll worry that Marlena Evans (Deidre Hall) could be in grave danger thanks to Princess Gina Von Amberg aka Hope Brady’s (Kristian Alfonso) plot. Kate will make a stunning confession to someone – perhaps in hopes of stopping Princess Gina’s deadly scheme.

However, that scheme won’t really be so deadly. This is all part of Princess Gina and Stefano DiMera aka Steve Johnson’s (Stephen Nichols) grand plan. They need Marlena and John Black (Drake Hogestyn) to “die,” but that just means faking their deaths. Stefano and Princess Gina will pull off their goal soon, so it won’t be long until John and Marlena face some heartbreaking losses.

Over with Rafe Hernandez (Galen Gering), he’ll welcome Shawn Brady (Brandon Beemer) back to Salem. DOOL spoilers say Shawn will speak with “Hope” and quickly figure out why she’s acting so weird. Rafe will be shocked when Shawn reveals his suspicions. Shawn won’t be able to explain everything, but he’ll admit that he believes “Hope” is actually Princess Gina.

Meanwhile, Lani Price (Sal Stowers) will face some difficult updates. She’ll find out Gabi Hernandez (Camila Banus) and Eli Grant (Lamon Archey) are getting married, so that’ll be hard for Lani to accept. Luckily, Lani won’t have to accept it for long! You can bet that Gabi’s downfall is rapidly approaching.

Next, Chad DiMera (Billy Flynn) will demand answers from Kristen DiMera (Stacy Haiduk). He’ll grill Kristen about her face-to-face meeting with Stefano and hope he can score one himself. Later, Chad and Abigail DiMera (Kate Mansi) will make a shocking discovery, so we’ll see if that ties in with Stefano somehow.