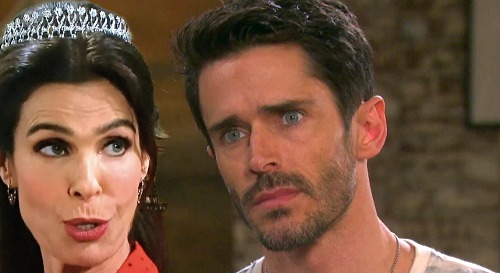 Days of Our Lives (DOOL) spoilers tease that Princess Gina Von Amberg aka Hope Brady (Kristian Alfonso) will focus on her mission. She’s scheming to get Marlena Evans (Deidre Hall) out of the way and clear the path to a future with John Black (Drake Hogestyn). Stefano DiMera aka Steve Johnson (Stephen Nichols) wants Marlena for himself, but he needs John out of the picture, too.

With that in mind, John and Marlena must “die.” During the week of January 27-31, Days spoilers say the plot to fake “Jarlena’s” deaths will heat up. However, a surprise return will leave Princess Gina fearful.

DOOL fans can expect Shawn Brady (Brandon Beemer) to show back up in Salem and immediately suspect something’s up.

Princess Gina will be busy setting a trap for Marlena, so she won’t exactly have time to chit-chat. She won’t be keen on letting Shawn get too close either. If “Hope” blows Shawn off, that’ll be a huge red flag.

The real Hope would love the chance to sit down and catch up with her son. Shawn will definitely feel like Hope isn’t quite herself.

Plus, Rafe Hernandez (Galen Gering) will tell Shawn about all the suspicious clues he’s noticed. They’ve really piled up over the last few months. In fact, Rafe’s the one who’ll summon Shawn to help crack the case.

It turns out Shawn will indeed crack it! He’s someone who has history with Princess Gina and obviously knows Hope well. It won’t take Shawn long to realize what’s actually going on here.

Days of Our Lives spoilers say the puzzle pieces will come together for Shawn. He’ll solve the mystery that everyone else has been so baffled by.

The reason Hope isn’t acting like herself is because she isn’t herself at all. Shawn will realize Hope is Princess Gina, but that’ll leave him with questions – and decisions to make.

Naturally, Shawn will have to sort out all the implanted memory drama and figure out what Princess Gina’s angle is. He’ll also have to decide whether to confront Princess Gina or perhaps use a setup to expose her. Regardless, Shawn could be in grave danger thanks to his newfound knowledge!