Days of Our Lives Spoilers: Xander Desperate To Save Mickey – Begs Brady To Get Tested As Baby’s Bone Marrow Donor

BY hellodrdavis on January 20, 2020 | Comments: one comment
Related : Days of Our Lives, Soap Opera, Spoiler, Television 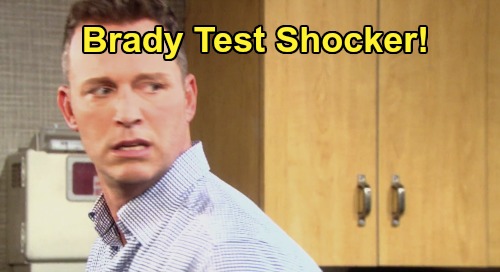 Days of Our Lives (DOOL) spoilers tease that Xander Kiriakis (Paul Telfer) will be on a serious mission. As DOOL viewers know, Xander is completely in love with Sarah Horton (Linsey Godfrey) and her baby MacKenzie “Mickey” Horton. He’s been like a father to Mickey since she was born, and he feels a deep pull to the little girl. And for many months, Xander did help to raise Mickey and acted as her father.

But then things went south for Xander. Nicole Walker (Arianne Zucker) decided to follow her conscience and tell Eric Brady (Greg Vaughan) that baby Mickey was his daughter.

That was a secret that Sarah and Xander worked hard to keep, and Xander was extremely upset with Nicole for spilling the beans. And that made perfect sense, given that Xander knew that Eric would try to limit his access to Mickey.

As it turned out, that’s exactly what happened. Eric freaked out and has demanded that Xander can’t be anywhere near Mickey. And to make matters worse, Mickey was subsequently diagnosed with cancer.

So while Xander just wanted to take care of Mickey and be there for Sarah, he had to keep his distance because of Eric’s angry demands.

Well, as you might be aware, DOOL is about to embark on a flashback week during the week of January 20-24 – that is, a week that occurs entirely in the past. It will help explain some things that happened during the time jump year, and it seems that much of the action will take place in the hours surrounding baby Mickey’s birth.

Long story short, DOOL spoilers indicate that Sarah will be involved in a terrible car accident as she’s in labor and on her way to the hospital. It appears that Xander will encounter her in full and active labor in the moments following the accident, and after the baby is born, Xander will do something unthinkable.

Days of Our Lives spoilers indicate that once Sarah gives birth and she and the baby have made it to the hospital, a terrible tragedy will occur, and the baby will die.

But because Sarah’s baby will be in the baby ward along with another baby girl who’s just been born, Xander will switch the babies so that Sarah doesn’t have to face the horror of having her daughter die.

Well, as it turns out, the other baby will belong to Kristen DiMera (Stacy Haiduk) and Brady Black (Eric Martsolf). That means that Sarah will end up getting Kristen and Brady’s little girl, and no one will be the wiser.

But then flash forward a year, and Xander will find out that baby Mickey has cancer…and that she needs a bone marrow transplant from a close blood relative.

So now, Xander will be in a tricky situation. He’ll know exactly who should be tested as a bone marrow donor for Mickey – Kristen and Brady. But if he acts on that information, then everyone could find out that baby Mickey is actually the biological child of Kristen and Brady, which would spell disaster for him and Sarah.

According to DOOL spoilers, Xander will start to get desperate after nobody who’s been tested is a suitable bone marrow match for Mickey. And it looks like he’s eventually approach Brady with what seems like an off-the-wall request: he’ll urgently want Brady to be tested as a possible bone marrow donor for Sarah and Eric’s little girl. It will be a risky move, but he’ll feel like he has no choice but to ask.

We’ll see what happens from here, but it sure seems like people might start asking some serious questions, since Brady and Eric are not related by blood. But of course, who would suspect that Xander had pulled off a baby switch?

What do you think? Will Xander’s attempt to save Mickey’s life end up revealing that she’s Kristen and Brady’s biological daughter? Stay tuned to DOOL and don’t forget to check CDL often for the latest Days of Our Lives spoilers, updates, and news.