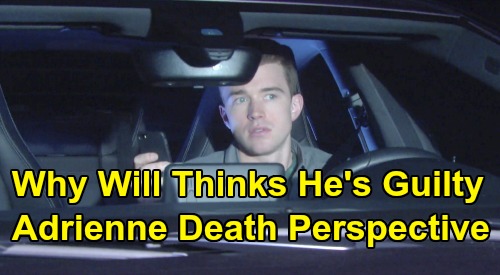 Days of Our Lives (DOOL) spoilers reveal that there’s been a lot of talk about the awful night that Adrienne Kiriakis (Judi Evans) died. Victor Kiriakis (John Aniston) told Ciara Brady (Victoria Konefal) that Will Horton (Chandler Massey) was the innocent man he framed with Xander Kiriakis (Paul Telfer). He revealed the rest of the story offscreen, but DOOL spoilers confirm most of the details.

We know Adrienne was in a shocking accident along with Sarah Horton (Linsey Godfrey). Maggie Kiriakis (Suzanne Rogers) was to blame, but Victor and Xander made sure Will took the fall. However, there are still plenty of puzzle pieces for Days to put together.

They’ll offer a clearer picture when the story’s told from Will’s perspective during the week of January 20-24.

As you’ve probably heard by now, five special time-jump reveal episodes are on the way. In these episodes, Days of Our Lives spoilers say Sonny Kiriakis (Freddie Smith) has a stunning proposal in mind.

That may have involved plans for actual wedding to make up for their makeshift hospital nuptials. Then again, it could’ve been an idea that put Will out on the road.

If Will set out to purchase or retrieve something, that might be why he was out alone. Whatever the case, Days of Our Lives spoilers say Will stumbled across a shocker. In these flashback episodes, Will finds Adrienne and Sarah in a dangerous situation, which he somehow believes he’s responsible for.

It sounds like Victor and Xander took things a step further that just not correcting Will. Since they “sent” him to prison, it seems they must’ve planted some evidence to back up Will’s fears.

No matter how they pulled it off, Days of Our Lives spoilers say Will faces crushing guilt in the flashbacks ahead. After Adrienne’s devastating death, Will opens up to JJ Deveraux (Casey Moss) about his role in the accident.

JJ likely advises Will to take responsibility or risk having this haunt him. Perhaps JJ even reflects on nearly killing Theo Carver (Kyler Pettis) and how difficult that was to cope with.

Later, Will comes clean to Sonny and Justin Kiriakis (Wally Kurth). He stuns them with the news that he killed Adrienne, which naturally brings some strong emotions.

Some powerful scenes are coming, so Days fans won’t want to miss them. It’ll be interesting to see the details of Will’s perspective, especially since we know he’s innocent! We’ll give you updates as other Days news comes in. Stay tuned to DOOL and don’t forget to check CDL often for the latest Days of Our Lives spoilers, updates and news.