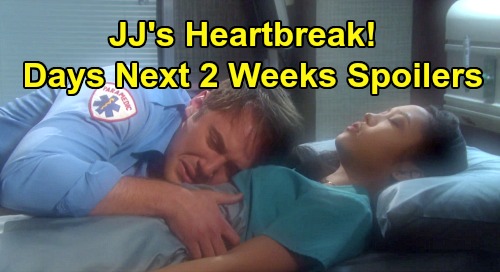 Days of Our Lives (DOOL) spoilers for the next two weeks tease that some stunning revelations are on the way. During the week of January 20-24, plenty of time jump questions will be answered. Some Mother’s Day drama will unfold as DOOL takes us back to that awful night in flashbacks.

In these crucial scenes, Kristen DiMera (Stacy Haiduk) suffers through a traumatic birth before she meets her beautiful baby girl. Brady Black (Eric Martsolf) is also a proud papa as they live in the moment. Sadly, their joy doesn’t last long.

Over with Sarah Horton (Linsey Godfrey), she’s in labor as Adrienne Kiriakis (Judi Evans) crashes on the highway. Will Horton’s (Chandler Massey) distracted by his phone in another car – and then crash! Will’s led to believe he caused the accident that killed Adrienne.

In reality, Maggie Kiriakis (Suzanne Rogers) is to blame after a troubling encounter with her daughter, Summer Townsend (Marie Wilson). Xander investigates the situation and finds an empty liquor bottle next to Maggie, who’s passed out drunk and can’t remember a thing.

Xander doesn’t want Maggie to know she killed Adrienne – and neither does Victor Kiriakis (John Aniston), so he teams up with Xander to hide it.

At the hospital, some tough goodbyes play out after Adrienne’s death. Will also confesses to being on his phone and causing the collision. That isn’t true, but Sonny Kiriakis (Freddie Smith) is devastated just the same.

Meanwhile, Sarah’s baby arrives at the hospital and suddenly dies. Victor tells Xander to switch Sarah’s kid for Kristen and Brady’s, so Xander gets the job done.

Once Kristen hounds Haley Chen (Thia Megia) for answers about her baby, things take a dangerous turn. Kristen causes Haley’s fall down a staircase, so Brady’s horrified. However, he ultimately sees that Kristen’s in terrible pain. She’s not in her right mind following the incident, so Brady has some sympathy.

Next, JJ Deveraux (Casey Moss) learns Haley died from her fall. He’s informed by Abigail DiMera (Kate Mansi) before he cries over Haley’s corpse. Days of Our Lives spoilers say these flashbacks are sure to offer an exciting look at the past.

We’ll eventually head back to the present, so Ciara Brady (Victoria Konefal) will work to convince Will Horton (Chandler Massey) that he’s truly innocent.

During the week of January 27-31, Sonny will deepen his relationship with Evan Frears (Brock Kelly). Their bond will grow stronger, so Sonny will be moving on while Will deals the news of his innocence.

Elsewhere, Eli Grant (Lamon Archey) will have a presumably steamy dream about Lani Price (Sal Stowers). He won’t be able to get Lani out of his head, so it seems his desires will take over.

Other Days of Our Lives spoliers say Eric Brady (Greg Vaughan) will once again battle a sense of betrayal. This may have something to do with Nicole Walker’s (Arianne Zucker) fake relationship with Brady. Eric may not be so sure it’s as fake as they claim!

Finally, Days spoilers say Shawn Brady (Brandon Beemer) will return to Salem at Rafe Hernandez’s (Galen Gering) request. It won’t be long until Shawn’s tackling an important case – the case of why “Hope Brady” aka Princess Gina Von Amberg (Kristian Alfonso) is out of control.

It sounds like some fantastic episodes are coming up. We’ll give you updates as other Days details emerge. Stay tuned to DOOL and don’t forget to check CDL often for the latest Days of Our Lives spoilers, updates and news.