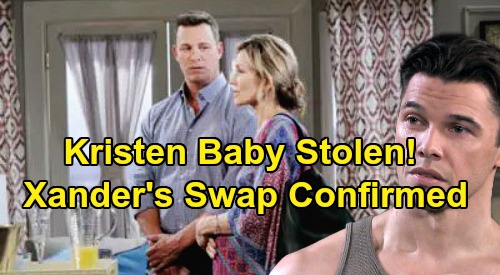 Days of Our Lives (DOOL) spoilers tease that a major secret will be revealed. Ever since Sarah Horton (Linsey Godfrey) and Kristen DiMera (Stacy Haiduk) got pregnant at the same time, there have been baby swap suspicions. However, there was never confirmation…until now.

The latest DOOL spoilers confirm that the babies were indeed switched, which means Sarah’s daughter is actually the one that died. She’s been raising Kristen and Brady Black’s (Eric Martsolf) baby the entire time. Now you’re probably wondering about all the details of this swap – including who did it and why. Let’s discuss what happened on that horrible night, which fell on Mother’s Day.

Victor Kiriakis (John Aniston) and Xander Kiriakis (Paul Telfer) put innocent Will Horton (Chandler Massey) behind bars, but framing Will wasn’t all they accomplished that fateful evening. After drunk Maggie Kiriakis (Suzanne Rogers) caused Adrienne Kiriakis’ (Judi Evans) accident, it set an awful chain reaction in motion. Sarah was in the passenger side, and her baby was ultimately delivered by Xander.

Unfortunately, the situation took a terrible turn after they brought the baby to the hospital. Days of Our Lives spoilers say flashbacks during the week of January 20-24 will show everything that went down. After Victor learned Sarah’s baby didn’t survive, he ordered Xander to swap her kid for Kristen’s.

Victor undoubtedly wanted to protect Maggie from knowing that she essentially killed her own grandchild. He didn’t want Maggie’s daughter to suffer either – and he certainly didn’t mind if this tore “Bristen” apart. Victor must’ve thought this was the best and only real option in his mind.

As for Kristen’s side of the story, Days of Our Lives spoilers reveal that she experienced a complication shortly before the delivery. The umbilical cord was wrapped around the baby’s neck, so there were concerns about getting the baby out fast enough. Brady urged Kristen to push so they could be sure their daughter wouldn’t suffocate.

The delivery wound up going well, which brought Kristen and Brady a fleeting moment of joy with their daughter. Sadly, Days spoilers say Xander followed Victor’s orders and set up their heartbreak soon after. He took Kristen’s baby – who we now know as Mackenzie “Mickey” Horton – and switched her for Sarah’s dead one.

Of course, Days already revealed that Kristen’s reaction to her baby’s death led to Haley Chen’s (Thia Megia) demise. Kristen shoved Haley down a flight of stairs, so Xander set that in motion by making Kristen believe her baby was gone for good.

It sounds like these flashbacks are going to bring some devastating scenes! We’ll give you updates as other Days news comes in. Stay tuned to DOOL and don’t forget to check CDL often for the latest Days of Our Lives spoilers, updates and news.