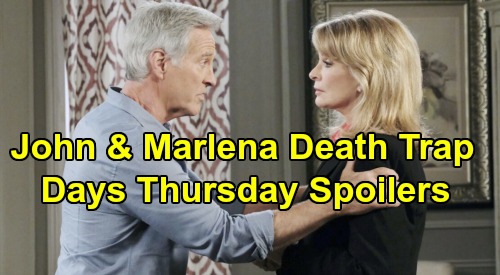 Days of Our Lives (DOOL) spoilers for Thursday, January 16, tease that Stefano DiMera aka Steve Johnson (Stephen Nichols) and Princess Gina Von Amberg aka Hope Brady (Kristian Alfonso) will put their plot in motion. They’ve settled on a mysterious plan – one that insists John Black (Drake Hogestyn) and Marlena Evans (Deidre Hall) must “die.” Now they just have to take the first risky step.

Every time “Hope” and “Steve” interact with Hope and Steve’s loved ones, they’re taking a gamble. They’re pretty good at playing their parts, but they still manage to slip up frequently.

Suspicions are being raised for several Salemites, so Stefano and Princess Gina have to be careful – at least if they want to pull off this apparent faked death scheme.

On Thursday, Days of Our Lives spoilers say “Steve” will reveal bogus info to John. He’ll lure him on a wild goose chase to track down Stefano, so this is obviously a trap. “Hope” will back “Steve” up and plan to fulfill her side of things while “Steve” and John are out of town.

Of course, Marlena should raise an eyebrow at “Hope’s” behavior as usual. She can definitely tell something’s off with “Hope” lately.

The same goes for Rafe Hernandez (Galen Gering), who’ll share his concerns with Kayla Brady (Mary Beth Evans) in Thursday’s DOOL episode. Days spoilers say Rafe and Kayla will agree that “Hope” just isn’t herself. They’ll trade stories and clues as they try to figure out why “Hope’s” acting so weird.

Other Days of Our Lives spoilers state that Lani Price (Sal Stowers) will get a visit from her fellow schemer. She called Kristen DiMera (Stacy Haiduk) and asked for help, so Kristen will drop by for a strategy session.

They’ll work on a new tactic that could take away Gabi Hernandez’s (Camila Banus) power and make her wish she’d never targeted Lani.

JJ will try and fail to disable the pacemaker app – at least for now. This storyline isn’t wrapping up just yet, so JJ will have to find another way to assist Lani. It sounds like some hot drama’s brewing, so stay tuned.

We’ll give you updates as other DOOL news comes in. Stick with the NBC soap and don’t forget to check CDL often for the latest Days of Our Lives spoilers, updates and news.