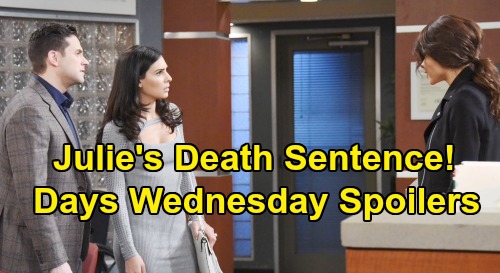 Days of Our Lives (DOOL) spoilers for Wednesday, September 4, tease that Kayla Johnson (Mary Beth Evans) will deliver some crushing news. She managed to revive Julie Williams (Susan Seaforth Hayes) after her heart stopped, but it’s only a temporary fix. Kayla will let Julie’s loved ones know that she needs a transplant, but she’s too old to go on the list. She’ll essentially give Julie a death sentence.

Of course, Julie’s loved ones will try to hold out hope anyway. They know Julie’s a fighter, so they’ll trust that maybe a heart will surface somehow. Days spoilers say Ciara Brady (Victoria Konefal) and Doug Williams (Bill Hayes) will sit by Julie’s bedside on Wednesday. They’ll pray for a miracle, but it’ll definitely be a rough time for Julie’s family.

It’ll also be a rough time for Gabi DiMera (Camila Banus) since she just learned the truth. Ben Weston (Robert Scott Wilson) revealed that Julie had a heart attack, so now Gabi knows it was real after all. In, Wednesday’s DOOL episode, Lani Price (Sal Stowers) will realize Gabi’s to blame for leaving Julie to die. She’ll blast Gabi with everything she’s got, so some hot drama’s brewing.

While Gabi tries to defend herself, Days of Our Lives spoilers say Eric Brady (Greg Vaughan) will remain in a tight spot. A guard pulled a gun on him, but Eric is adamant about leaving to find Nicole Walker (Arianne Zucker) and Holly Jonas (Harlow and Scarlett Mallory). He’ll be looking at a deadly outcome thanks to his determination, but help is on the way!

Ben will arrive just before a bullet gets pumped in Eric and possibly Vivian Alamain (Robin Strasser), too. Stefan DiMera (Brandon Barash) sent Ben to pick up Vivian in Chicago, so Ben will be in the right place at the right time. Days of Our Lives spoilers say he’ll come to Eric’s rescue and once again get a hero moment.

Ben may need a hero of his own after Xander Cook (Paul Telfer) receives deadly orders later this week. Victor Kiriakis (John Aniston) will be determined to rid Ciara Brady (Victoria Konefal) of her serial killer beau, so big trouble’s brewing! We’ll give you updates as other Days details emerge. Stay tuned to DOOL and don’t forget to check CDL often for the latest Days of Our Lives spoilers, updates and news.