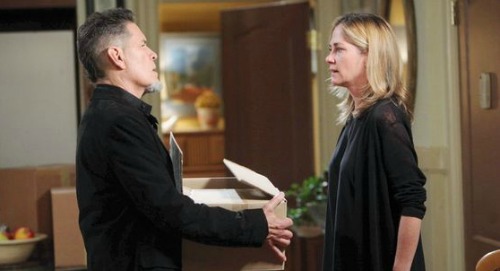 Days of Our Lives (DOOL) spoilers tease that Ben Weston (Robert Scott Wilson) is going to be in a world of hurt very soon. As DOOL viewers know, Ben is scheduled to marry Ciara Brady (Victoria Konefal), but so far various disasters have befallen the couple. First, Ciara’s wedding gown was nearly ruined with nail polish, and then her wedding ring went missing out of its box.

So far, Claire Brady (Olivia Rose Keegan) has been suspected for these bizarre occurrences, but as DOOL spoilers are indicating, it seems that someone else is likely behind them.

Namely, it’s looking more and more like Eve Donovan (Kassie DePaiva) is going to end up being the person behind the wedding disasters. And as you’ve probably heard by now, there’s going to be a big, scary looking bomb planted in the chapel where Ciara and Ben will marry.

And from the latest DOOL promo, it seems that the wedding will finish before the explosion rips the church apart and quite possibly traps people inside, causing all sorts of chaos.

Well, once all the dust settles from the explosion, DOOL spoilers say that Ben will be missing, and he’ll soon find himself in captivity somewhere being held by an unknown captor.

Given that Eve is set to return to canvas any time now, it seems pretty likely that she’s the one who will be responsible for the pre-wedding mishaps, church bomb/explosion, and Ben’s capture.

Eve has every motivation to want to ruin all of Ben’s happiness, since back in the day he killed her daughter Paige Larson (True O’Brien).

One can imagine that Eve was fuming when she learned that Ciara had saved Ben from being executed earlier this year. Eve absolutely detests Ben for killing Paige, and at this point she probably detests Ciara for saving Ben, too.

It makes perfect sense that Eve would be behind all of this mayhem. But we have to wonder about something – DOOL spoilers also say that Paige’s father Eduardo Hernandez (A Martinez) will be back on canvas in August, and that leads us to think that Eve might not be working alone in her quest to punish Ben.

Might Eduardo be working with Eve on her plan to ruin Ben and ultimately even kill him for what he did to Paige? It’s kind of hard to imagine Eve having the knowledge to successfully plant a bomb, although she certainly could have hired a professional to do the job.

Bombs seems to be more in Eduardo’s wheelhouse, so perhaps he planted it as part of his teaming with Eve.

Of course, if Eduardo is involved with Eve to ruin Ben’s wedding and capture him, then that probably means that some pretty terrible things are in store for Ben.

It means that Ben will be faced with the angry parents of a young woman that he killed, and if Eduardo’s involved then that probably means that Ben’s chances of escaping from the situation are nil.

We’ll see what happens here, but we suspect that Eduardo just may be in cahoots with Eve to make Ben pay the ultimate price for what he did to Paige. Do you think that Eduardo’s return will be all about helping Eve to get her revenge for Paige’s death?

Stay tuned to the NBC soap and don’t forget to keep CDL at the ready for all the latest Days of Our Lives spoilers, updates, and news. And be sure to check out our daily DOOL recaps as well!