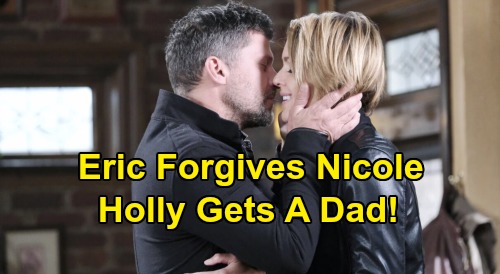 Days of Our Lives (DOOL) spoilers tease that Nicole Walker (Arianne Zucker) and Eric Brady (Greg Vaughan) will exchange confessions. During the week of February 3-7, Nicole will decide it’s time to come clean. She loves Eric with all her heart, so she won’t want to let a chance at reconciliation pass her by.

Nicole won’t know if Eric’s willing to forgive her, but she’ll think he deserves the truth about Brady Black (Eric Martsolf). Days spoilers say Nicole will admit she cooked up a plan, which involved a fake relationship. Brady and Nicole have been pretending they’re in love to fight off Kristen DiMera (Stacy Haiduk).

Nicole will assure Eric that she was genuinely trying to help Brady. She just didn’t want Brady to get dragged back into Kristen’s twisted web. However, Nicole will admit she wanted a little revenge as well.

DOOL fans can’t forget that Kristen wore a mask of Nicole around town and let everyone believe Holly Jonas (Harlow and Scarlett Mallory) was dead! Kristen has done some despicable things – including plenty to Eric.

Eric will completely understand why Nicole would want vengeance and may appreciate the good deed she did for Brady, too. After Nicole’s confession, she’ll get some of Eric’s confessions in return. For starters, Eric will admit he was jealous when he heard Nicole had reunited with Brady.

That admission will actually leave Nicole pretty flattered. She’ll be glad to know she can still stir up some jealousy in her man – at least she hopes he’ll be her man again soon.

Days of Our Lives spoilers say Eric will think it’s best to be totally honest. It’s the only way to seek a fresh start. Eric will confess he was so distraught he nearly slept with Sarah Horton (Linsey Godfrey), which should leave Nicole taken aback.

Eric will reveal that Sarah was the one who halted things, but Nicole will just be happy the brakes were indeed pumped.

From there, Eric will make one final confession. He’ll come clean about how much he’s missed Nicole, so that’ll be exactly what she wants to hear. Nicole will assure Eric she’s missed him as well – and so has Holly, who views Eric as a father figure.

Thankfully, Holly’s fill-in dad is coming home. Days of Our Lives spoilers say Eric will grant Nicole the forgiveness she’s seeking. He’ll insist he wants to get back together, which means he’ll be moving back in the apartment. In a celebratory moment, Eric and Nicole will share a passionate kiss to seal the deal.

Once Eric’s settled back at his place, perhaps “Ericole” will do a bit more than lock lips! They’ll undoubtedly reunite in the bedroom before long, so stay tuned. We’ll give you updates as other Days news comes in. Stick with DOOL and don’t forget to check CDL often for the latest Days of Our Lives spoilers, updates and news.