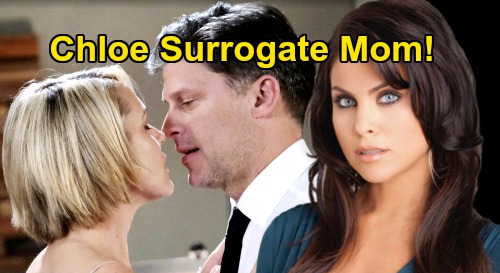 Days of Our Lives (DOOL) spoilers tease that Nicole Brady (Arianne Zucker) and Eric Brady (Greg Vaughan) will need a new story down the road. Right now, Eric and Nicole have more than enough drama on their plates. Sami Brady’s (Alison Sweeney) return has already caused chaos – and things are only going to get worse in the coming episodes.

DOOL fans know Sami pushed Rafe Hernandez (Galen Gering) to turn down Allie Horton’s (Lindsay Arnold) adoption offer. After Nicole exposes that scheme during the week of July 27-31, Allie will lash out at her mom once again. Days spoilers say Allie will want Nicole – NOT Sami – by her side as she gives birth.

After Nicole helps Allie bring her child into the world, that should bring a beautiful moment between them. It could be a turning point in more ways than one. In the end, Allie might decide to tackle motherhood after all.

Rafe, Will Horton (Chandler Massey) and Sonny Kiriakis (Freddie Smith) are all exiting Days in the coming months, so it makes sense for Allie to keep the kid. Sami should settle down and may even thank Nicole for helping with the delivery. As this round of drama wraps up, what’s just around the corner for Eric and Nicole?

Let’s consider what Days of Our Lives has thrown at Nicole and Eric over the past few months. Eric had to deal with the devastating news that the real Mackenzie “Mickey” Horton was dead.

He lost Rachel DiMera Black, who had been swapped in Mickey’s place, but he also had to face the crushing blow of losing his biological daughter.

Even before the baby switch shocker came out, there was a scene where Eric thought Nicole might be pregnant. Nicole was working to prove her hunch about Mackenzie, which lead to some strange behavior and Eric’s suspicions about a bun in the oven.

Of course, Nicole confirmed she wasn’t expecting. Days has established that it’s unlikely Nicole will ever carry a child to term. Although soap miracles happen all the time, it’s doubtful DOOL would do yet another pregnancy story so soon after Allie’s and Lani Price Grant’s (Sal Stowers).

However, that doesn’t mean Nicole and Eric won’t add to their brood.

Days of Our Lives spoilers say Chloe Lane (Nadia Bjorlin) will return soon – and the timing is interesting. DOOL viewers will recall that Chloe was the surrogate who gave birth to Holly Jonas (Elin Alexander).

Could Nicole and Eric ask for help giving Holly a sibling? Will Chloe face a new surrogacy request from the newlyweds?

That sounds like a terrible idea since Chloe got so attached to Holly and even fought Nicole for custody at one point. Nevertheless, this is Salem – the land where terrible ideas are a regular occurrence!

Since Chloe and Nicole are on good terms now, perhaps Nicole would think it’d be worth a shot.

Eric and Nicole have been placed right in the middle of Allie’s baby mayhem, so there may be a reason for that. After watching Allie with her new bundle of joy, will Nicole long for another baby?

Eric would probably be on board with a brother or sister for Holly – at least based on his previous reaction. Eric seemed a tad disappointed when he realized Nicole wasn’t pregnant.

If Nicole and Eric eventually consider taking the surrogacy route for another child, perhaps DOOL will tie Chloe into their new story. As other updates become available, we’ll offer up the latest details.

Days spoilers say some exciting things are in store for “Ericole,” so stay tuned! Make CDL your hotspot for fantastic Days of Our Lives spoilers, news and updates.