BY hellodrdavis on April 1, 2020 | Comments: one comment
Related : Days of Our Lives, Soap Opera, Spoiler, Television 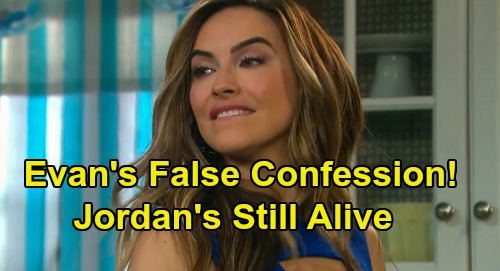 Days of Our Lives (DOOL) spoilers tease that Evan Frears aka Christian Maddox (Brock Kelly) could have some big secrets to divulge. As DOOL viewers know, Evan recently confessed to killing Jordan Ridgeway (Chrishell Stause) when Ciara Brady (Victoria Konefal) held him at gunpoint and marched him to the prison where Ben Weston (Robert Scott Wilson) was about to be executed for the murder. Ben was saved thanks to Evan’s confession.

Evan seems like a pretty disturbed guy all the way around. Evan’s certainly got a difficult relationship with his father, Orpheus (George DelHoyo), and he seems “off” at times. Certainly, killing Jordan would put him in the dangerous and unstable category, so can we really take Evan at his word that he killed someone?

DOOL buzz is that some or all of Evan’s story might not be true. Could Evan perhaps be so deeply disturbed that he didn’t actually kill Jordan even though he claims that he did?

That would certainly be a strange twist, but then again Evan’s not the sanest of people, and he could have imagined the whole thing. Yes, Days viewers saw a flashback of Evan strangling Jordan, but this was based on Evan’s memory, and he could have fabricated the tale.

It wouldn’t be too much of a stretch to think that Evan would make up a story about killing Jordan in order to impress Orpheus, who himself is a disturbed individual. Or Evan could just be confused about what happened. Of course, another possibility is that Evan did kill Jordan, but that she was somehow revitalized, perhaps by Dr. Wilhelm Rolf (William Utay).

It wouldn’t be out of the realm of possibility for Orpheus and Rolf to be connected in some way, especially if Orpheus had ties to Stefano DiMera aka Steve Johnson (Stephen Nichols) in recent days.

All of this would have had to take place off-screen, but it’s certainly possible that Rolf intervened and saved Jordan without anyone being the wiser. In fact, Evan could be unaware that Jordan was saved if Orpheus and Stefano/Rolf were in cahoots to save Jordan for some reason.

It will be interesting to see what becomes of all of this, but if Evan’s tale about what happened to Jordan is false, or if there are elements of the story that he’s not aware of (like Jordan being brought back to life after the fact), then it will probably come out down the line.

After all, even though Evan’s confession was thrown out of evidence, the DA is apparently going forward with the case against him. Evan will need a good defense, and if Jordan’s actually alive, that would do the trick!

Do you think that Jordan could somehow be alive? Stay tuned to Days of Our Lives and keep us bookmarked for all the latest soap news and spoilers. You can trust CDL to keep you updated on all the latest DOOL information!