Days of Our Lives Spoilers: Freddie Smith Returns To DOOL – Sonny’s Video Visit With Will 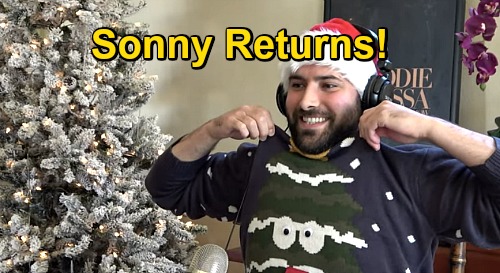 Days of Our Lives (DOOL) spoilers has some great news to pass on about the return of Freddie Smith, who portrays Sonny Kiriakis. Freddie recently announced that he will be making a special appearance on the show on Wednesday, December 30.

Freddie announced the return on his YouTube channel along with his fiancé, Alyssa Tabit.

Freddie said that he had been holding onto the news about Sonny’s brief return since late October, and he seemed excited about the project of reprising the role once again on the show.

Freddie said that he and Alyssa ended up turning their living room into Sonny’s office for the filming, so that’s something to look for when the scene airs.

In the scene, Sonny will connect with Will Horton (Chandler Massey) via a video call on New Year’s Eve. As viewers are aware, Will recently returned to Salem by himself to celebrate Christmas with his family, but Sonny stayed behind in Arizona with their young daughter Ariana Horton (Sydney Brower).

Sonny and Will moved to Arizona earlier this year so that Sonny could head up a new venture with his brothers designed to find new ways to treat breast cancer.

This was important to Sonny given that his mom, Adrienne Kiriakis (Judi Evans), fought and won her battle against breast cancer before her tragic death in a car accident.

It will be great to see Sonny back in action on the show, if even for just a brief appearance. Fans have been missing “WilSon” and this will give everyone a chance to see Will and Sonny together and happy again. Viewers will need to tune in on Wednesday, December 30, to see what’s going on in Will and Sonny’s world.

Of course, when Will and Sonny left Salem, they had been discussing the idea of adopting another baby, so perhaps during their conversation on New Year’s Eve, we’ll hear where they are on that front!

Sonny may also have some news to share about how Gabi DiMera’s (Camila Banus) with Ariana has gone, since Gabi is now in Arizona visiting her daughter.

Are you looking forward to seeing Sonny back in action on the show? Stay tuned to the NBC soap and remember that CDL is your go-to place for all the latest Days of Our Lives spoilers, daily episode recaps, and news.