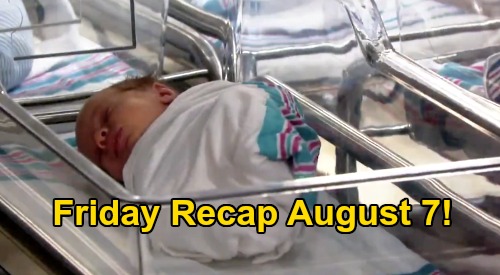 Days of Our Lives (DOOL) spoilers recap for Friday, August 7, reveal that Sarah Horton (Linsey Godfrey) and Xander Kiriakis (Paul Telfer) sat in town square for their date. Sarah mentioned that Eli Grant (Lamon Archey) and Lani Price-Grant (Sal Stowers) were having twins, and Xander suggested they toast with champagne.

Xander was a little on edge and impulsively offered to buy Sarah a new car when she revealed that her car needed to go to the shop, then he backtracked and apologized, saying that he just wanted to make Sarah happy.

Sarah suggested that Xander quit trying to be so desperate to make her happy, and she said that as long as Xander was always honest with her, then they’re good. Xander said that they should start over, and Sarah liked that idea.

After dinner, as Xander and Sarah walked toward the Salem Inn, Sarah said that she wanted to stay the night with Xander, then the two kissed passionately and went inside, where they made love happily.

Jake found the phone and left, and then Li Shin (Remington Hoffman) arrived wondering where Chad DiMera (Billy Flynn) was, since an important investor was waiting at the Bistro. Gabi said that Chad was out of town, and Li scoffed, saying that he’d have to cancel the meeting.

Gabi offered to step in for Chad, but Li said that the investor needed to meet with a blood family member. Gabi got an idea, and she went upstairs and found Jake. Gabi told Jake that she needed him to come to the Bistro to meet with an investor right now, but he balked.

Gwen (Emily O’Brien) came in, peeved and demanding that Jake come back to bed. After some bickering among the three, Jake decided to help Gabi. Gwen left in a huff.

Gabi then went and got one of Stefan DiMera’s (Brandon Barash) suits for Jake to wear, since he didn’t have a suit. Gabi went back downstairs and told Li that she had a “real DiMera” for him. Jake then walked in wearing Stefan’s suit. Li did a double take.

At the hospital, Nicole Walker (Arianne Zucker) visited with Allie Horton (Lindsay Arnold). Nicole and Allie rehashed how Allie didn’t have anyone to adopt her baby anymore, and Allie blasted Will Horton (Chandler Massey) for colluding with Sami Brady (Alison Sweeney).

Nicole shared that she had once kept the secret about Sarah having Eric Brady’s (Greg Vaughan) baby, but Allie still remained irked at Sami and Will.

Later, Allie and Nicole went to the nursery and looked through the window at Allie’s son. “That’s him…that’s my son,” Allie said.

At Eric’s apartment, Sami showed up wanting Eric’s help reconciling with her kids, but she also proceeded to blast Nicole, blaming Nicole for everything that she caused herself.

Brady hauled Sami over to the mirror and told her the only person to blame for this mess is staring back at her. Sami and Eric argued for a while, then Eric asked what Sami really wanted. Sami said that she needed her brother. “How do I fix this?” Sami asked.

Eric strongly suggested that Sami stop blaming Nicole for everything and ask for forgiveness from her kids. Sami thought she’d go immediately talk with Allie, but Eric said that wasn’t a great idea, and perhaps Sami should start by asking Will for forgiveness.

Eric reluctantly agreed to talk with Allie for Sami, but then Eric asked Sami to apologize to Nicole, and Sami refused angrily. Sami told Eric to never mind, that she’d do this her own way, and she left in a huff.

At the Kiriakis mansion, Will walked in as Sonny Kiriakis (Freddie Smith) was sitting in the living room upset. Sonny immediately lashed out at Will, and Will attempted to explain that he didn’t conspire with Sami.

But Sonny fired back that Will had lied to his own husband, and he was pretty peeved about the whole thing. Sonny was upset that Will had kept Sami’s actions a secret and that he had allowed them to tell Ari Horton (Sydney Brower) about the baby.

“I thought we built our marriage on trust!” Sonny railed. Will apologized and begged Sonny for forgiveness. Just then, Sami walked in and told Sonny that if he wanted someone to blame, it should be her.

Sonny said he didn’t have time for this right now, and he walked out. Will lamented about how Sonny might never forgive him. “I just hope you can find a way to forgive me,” Sami said.

That was a great episode of Days of Our Lives, and there’s plenty more coming next week, so stay tuned! Stick with the NBC soap and don’t forget to check CDL often for the latest Days of Our Lives spoilers, daily episode recaps, and news. We’ve got you covered!