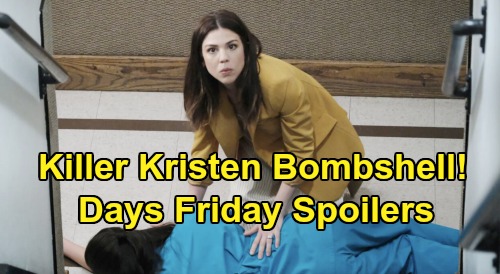 Days of Our Lives (DOOL) spoilers for Friday, January 24, tease that Kristen DiMera (Stacy Haiduk) will reel over Haley Chen’s (Thia Megia) fate. After Haley admitted Kristen’s baby was dead, she headed for the staircase and promised to find Kayla Brady (Mary Beth Evans). Haley tangled with Kristen briefly before tumbling down and landing HARD.

Kristen looked horrified, but she’ll sort of go into her own little world on Friday. Days spoilers say she’ll be in zombie mode as she gets back in bed and stares off into space. It won’t be long until Brady Black (Eric Martsolf) returns and tries to piece together what happened.

Meanwhile, Abigail DiMera (Kate Mansi) will find Haley lifeless at the bottom of the stairs. She’ll have the heartbreaking task of telling JJ Deveraux (Casey Moss).

DOOL fans know JJ was planning to propose, but he’ll face a tough goodbye instead. Once Abigail reveals that Haley’s dead, JJ will sob over her body and undoubtedly wonder why love keeps slipping away like this.

Paige Larson (True O’Brien) was strangled to death by Ben Weston (Robert Scott Wilson), so JJ has cried over a girlfriend’s corpse before. This certainly isn’t something JJ ever thought he’d have to do again. It’s easy to see why JJ went so off the rails in the months that followed this Mother’s Day disaster.

Other Days of Our Lives spoilers say the flashbacks scenes will continue. Brady will receive word of Haley’s demise and realize Kristen’s to blame, so that’ll be a lot for him to take in.

Over with Sonny Kiriakis (Freddie Smith), he’ll struggle to understand what Will Horton (Chandler Massey) just told him. Will confessed that he’s the reason Adrienne Kiriakis (Judi Evans) is dead, so he’ll have to explain how he caused the accident.

Justin Kiriakis (Wally Kurth) will also get updates on Will’s side of the story, which isn’t the full picture. Will didn’t think he swerved into Adrienne’s lane – and his car is gray, not black like the one Sarah Horton (Linsey Godfrey) saw out on the road.

Since Will didn’t see Maggie Kiriakis’ (Suzanne Rogers) vehicle in the ditch, he assumes he must be guilty. There were no other cars anywhere in sight.

Will’s going to tell his tragic tale to Sonny and Justin, who’ll face a flood of difficult emotions. They both love Will with all their hearts, but this will be troubling to hear.

Justin and Sonny are bound to be angry that Will killed Adrienne over a text he could’ve waited to send. Again, that’s not really what went down, but Sonny and Justin won’t know any different thanks to Will’s false assumptions.

Xander Kiriakis (Paul Telfer) and Victor Kiriakis (John Aniston) certainly aren’t going to say anything! Days of Our Lives spoilers state that they’ll stick to their pact, especially now that they’re in so deep with this baby swap.

Over with Jack Deveraux (Matthew Ashford), he’ll arrive at the hospital to bid Adrienne farewell. Jack will struggle to let go of his sister, but he sadly has no choice.

It sounds like another gripping episode’s coming up. We’ll keep you posted as other Days news emerges. Stay tuned to DOOL and don’t forget to check CDL often for the latest Days of Our Lives spoilers, updates and news.