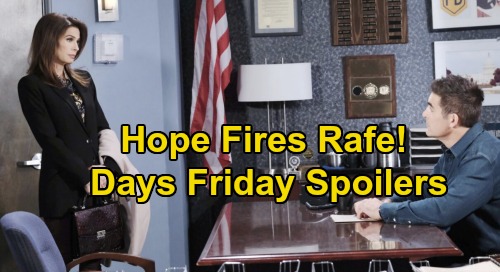 Of course, “Steve” won’t be as forthcoming as Kayla would like, but this will be mostly about ripping into him anyway. Kayla will blast “Steve” for his actions over the last two years. She won’t understand who this man standing in front of her is at all – which makes sense to Days fans!

Stefano’s memories were implanted into Steve’s body, so he won’t particularly care about Kayla’s outrage. Days of Our Lives spoilers say “Steve” will reiterate that he didn’t come back for Kayla. He’ll manage to rile Kayla up even more before she finally leaves in a huff.

Meanwhile, “Hope Brady” aka Princess Gina Von Amberg (Kristian Alfonso) will be on Rafe Hernandez’s (Galen Gering) mind. DOOL viewers know “Hope’s” fingerprints were found on the tiara, so she pretended she botched things and touched the evidence.

Rafe naturally found that weird since “Hope” should be a pro at investigations by now. She should know better than to make a mistake like that.

“Hope” also deleted the DNA match found in the system, which pointed to Steve. She lied about it being a match for Stefano, but Rafe doesn’t realize that just yet. Even so, Rafe will continue to mull over “Hope’s” bizarre behavior. He can tell Hope just isn’t herself, so he’ll share his concerns with Roman Brady (Josh Taylor).

Roman may agree that “Hope’s” been off lately, but he won’t have any more info than Rafe does. This mystery is something that’ll continue to unravel, especially after “Hope’s” shocking move.

Days of Our Lives say Rafe and “Hope” will have a massive argument. It’ll culminate in “Hope” firing Rafe, so he’ll be convinced that “Hope’s” got a secret – one she’s going to great lengths to keep hidden from him.

Other Days of Our Lives spoilers say Ciara Brady (Victoria Konefal) will give Ben Weston (Robert Scott Wilson) her full support. It’ll be the day of his final appeal, so Ciara will want Ben to know she’s got his back. If this involves another trip to prison, that could be how Victor Kiriakis (John Aniston) discovers Ciara’s deception.

Victor will indeed learn Ciara’s been manipulating him – and Xander Kiriakis (Paul Telfer) will find out, too. They’ll discuss Ciara’s betrayal and what they’re going to do about it in Friday’s exciting episode. We’ll give you updates as other Days news comes in. Stay tuned to DOOL and don’t forget to check CDL often for the latest Days of Our Lives spoilers, updates and news.