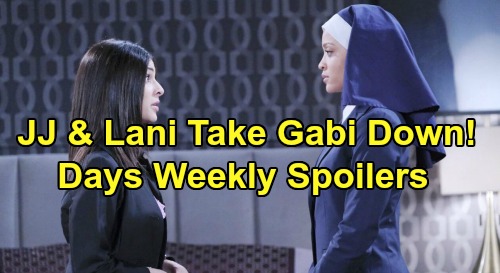 Days of Our Lives (DOOL) spoilers for the week of January 6-10 tease that some shockers are looming in Salem. For starters, Ciara Brady (Victoria Konefal) will freak after a fight with Victor Kiriakis (John Aniston) ends in disaster. Victor will suffer a stroke during their confrontation, so he’ll head to the hospital and Ciara will face blame from Xander Kiriakis (Paul Telfer).

Meanwhile, Kayla Brady (Mary Beth Evans) will want the truth from “Steve Johnson” aka Stefano DiMera (Stephen Nichols). “Steve” will insist he loves another, so Kayla will be curious about who this woman is. She’ll grill “Steve,” but he may stay vague about the details and keep his plan to win Marlena Evans’ (Deidre Hall) heart under wraps.

Over with Lani Price (Sal Stowers), she’ll face a flood of questions. Eli Price (Lamon Archey) will be perplexed by Lani’s decision to vandalize Gabi Hernandez’s (Camila Banus) store. He may feel like there’s something Lani isn’t telling him, but she won’t be able to divulge the whole truth.

He’ll want to help Lani however he can, which should give him a renewed sense of purpose. This project should be good for JJ as he focuses on getting his life together.

Other Days of Our Lives spoilers say Nicole Walker (Arianne Zucker) will try to sell a bogus story to Kristen DiMera (Stacy Haiduk). She’ll lie about the nature of her relationship with Brady Black (Eric Martsolf) – and Brady will back Nicole up.

Perhaps Brady will be scared about getting burned again and will just think this is the easiest option.

Nevertheless, there’s no way Kristen’s just going to surrender. If anything, this will only make Kristen more determined to win Brady back. Kristen will also be taken aback when someone shows up to see her.

There’s a good chance that’ll be “Steve,” and he’ll likely reveal his true identity. Stefano will wind up putting Kristen’s loyalty to the test later, so Kristen will probably pass with flying colors.

As for Ben Weston (Robert Scott Wilson), DOOL spoilers say some terrible news is coming up. Ben’s final appeal may not work out how he was hoping. Justin Kiriakis (Wally Kurth) will push Victor to do the right thing and come clean, but saving Ben isn’t in Victor’s power. Will Horton (Chandler Massey) is the innocent man Victor and Xander had locked up.

Days of Our Lives spoilers say Sonny Kiriakis (Freddie Smith) and Evan Frears (Brock Kelly) will grow closer in the week ahead. They’ll share a kiss, but Kate Roberts (Lauren Koslow) won’t want to give up on “WilSon’s” love story. She may even have a bad feeling about Evan the more she’s around him.

Kate will have a warning for Will, but there’s nothing he can do as long as he’s in prison. It’ll take some big twists and turns to get Will out! We’ll give you updates as other Days details emerge. Stick with DOOL and don’t forget to check CDL often for the latest Days of Our Lives spoilers, updates and news.