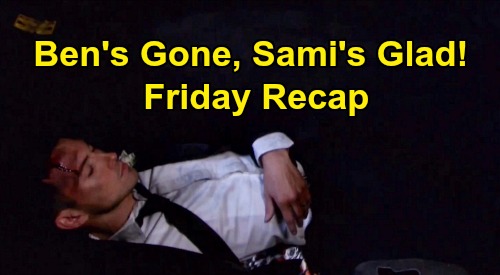 Days of Our Lives (DOOL) spoilers recap for Friday, July 24, reveal that Lucas Horton (Bryan Dattilo) and Sami Brady (Alison Sweeney) burst off the elevators into the nurses’ station at the hospital. They quickly spotted Marlena Evans (Deidre Hall) and wanted to know where Allie Horton’s (Lindsay Arnold) room was.

Soon, they arrived in Allie’s room, where Allie was talking with Will Horton (Chandler Massey). Will was just about to tell Allie how Sami had planned to coerce Rafe Hernandez (Galen Gering) into not adopting the baby when Lucas and Sami interrupted.

Sami went on about how Allie and Will could have been killed, and she wondered how they could have considered being involved at a murderer’s wedding. Will ordered his mom to drop it.

Will left the room, and Sami thought that maybe being involved in the explosion had made Allie change her mind about giving up her baby, but Allie explained that she was giving up the baby because she loved it so much and that she wanted Rafe to have the baby.

Sami pointed out that Will and Sonny Kiriakis (Freddie Smith) wanted to adopt the baby too. Allie said it was Rafe’s decision.

At Marlena and John Black’s (Drake Hogestyn) penthouse, Belle Black (Martha Madison) was startled when John walked in the door with a head bandage. Belle quickly learned about the explosion, and Claire Brady (Olivia Rose Keegan) came out and was stunned to hear about what happened.

Claire wondered where Ciara Brady (Victoria Konefal) was and if she was ok. John replied that Ciara was back at the church looking for Ben Weston (Robert Scott Wilson), who was missing. Later, Belle consoled Claire as she cried over a photo of Ciara and Ben.

At the church, Ciara, Rafe, Shawn Brady (Brandon Beemer), and Hope Brady (Kristin Alfonso) were stunned when Ben wasn’t under the rubble. Shawn insisted that Ben had to be somewhere, and Ciara left with Hope to go look for Ben, thinking he might be hurt and wandering around somewhere.

Rafe told Shawn that they needed to figure out what happened here.

Ciara and Hope walked through town square as Ciara tried to call Ben from Hope’s phone. Ben didn’t answer. Ciara lamented that she didn’t want to go up to her and Ben’s hotel room, and suddenly Shawn ran up with news about the explosion – firefighters had found evidence of a detonator.

Ciara was horrified, realizing that someone blew up her wedding on purpose.

Shawn noted that Ben had a lot of enemies, but Ciara said stoically that whoever did this was trying to hurt HER, and whoever did it will have to answer for it. Ciara rushed off, angry.

Meanwhile, back at the hospital, Rafe talked with Marlena and John at the nurses’ station, relaying that there was evidence of a bomb in the church vestibule.

Later, Rafe was on the phone giving orders to someone at the station when Sami walked up and overheard that the explosion was caused by a bomb and she soon learned that Ben was missing.

Sami snarked about how the world would be a better place without Ben in it, which exasperated Rafe. Rafe asked Sami how Allie and the baby were, and Sami said they were fine, and that she needed to talk with Rafe about the baby. Sami then proceeded to ask Rafe not to adopt the baby.

Over in Allie’s room, she talked with Lucas privately. Lucas was upset about the explosion and Allie being in it. He spent some tender moments with Allie, and he let Allie know that he agreed with Sami about what was best for the baby. But Lucas also said that he knew that the decision was Allie’s alone. Allie and Lucas hugged tenderly.

In a waiting room, Will talked with Marlena. Will asked if there was any news on Ben, and Marlena said no, and that the explosion was caused by a bomb. Will and Marlena talked briefly about Allie and the baby, and Marlena praised Will for not pressuring Allie in the way that Sami has.

Later, Sami and Lucas talked in the same waiting room, with Sami uncharacteristically agreeing with Lucas that they needed to give Allie space.

Back in Allie’s room, Rafe arrived to talk about the baby.

Allie realized that Rafe had made a decision, and Rafe said that he was flattered that Allie thought he was the right person to raise her child, but that after everything that happened with David Ridgeway (Kyler Ends), he just wasn’t ready to raise a child. Allie looked disappointed.

Near the nurses’ station, John and Marlena regrouped. John lamented about Ben being missing, and Marlena wondered if John had any idea who set the bomb in the church. John didn’t have any idea, but he said that at least no one could blame this on Claire.

Back at the penthouse, Belle was still consoling Claire when Ciara rushed in and blasted Claire, accusing her of planting the bomb in the church. “You tried to kill me and my husband!” Ciara yelled.

Claire was astonished, and Belle looked really worried. Claire insisted that she didn’t do it, and that she loved Ciara, but Ciara wasn’t having it. Ciara rattled off all the things that Claire did before the wedding – ruining the dress, taking the ring, making Ciara sick.

Ciara kept ranting, saying that Claire was so angry and that she hated Ben, and that this was all her doing. “This is crazy!” Claire yelled back. “You would know crazy, Claire. Stop acting so innocent!” Ciara yelled back.

Soon, Hope and Shawn ran in the door. Shawn intervened between Claire and Ciara, as Claire said that she wouldn’t blow up a church with all the people she loves there.

Ciara fired right back that Claire knew that she and Ben would be the first down the aisle. Ciara started sobbing, saying that she was going to call Rafe and that Claire should just confess. Claire refused to confess.

Hope insisted that she and Ciara needed to go. Ciara said that she knew that Claire did it, and that she was going to find proof. Finally, Ciara vowed to get Claire locked up again for good.

Hope and Ciara left, and Claire asked her parents if they knew that she didn’t do this. Shawn said of course he knew she didn’t plant a bomb at the wedding. “Well, that’s not at all how it sounded when you two were talking before,” Claire said.

Claire angrily went to her room, and Shawn told Belle that Claire couldn’t have set the bomb because she was home all night. Belle flashed back to when Claire had gone out earlier that evening. “That’s not exactly true,” Belle said.

At the Salem Inn, Hope and Ciara approached the door of Ben and Ciara’s room. Hope offered to stay with Ciara, but Ciara wanted to be alone. Hope decided to wait outside the door in case Ciara needed her.

Ciara went inside and realized that the room was decorated for their wedding night by Ben. Ciara fell on the bed sobbing, as she remembered their happy wedding. Finally, viewers saw a quick flash of Ben lying alone and unconscious somewhere dark.

That was a terrific episode of Days of Our Lives, and there’s plenty more coming next week, so stay tuned! Remember that CDL is your go-to place for soap spoilers and news. We’ve got you covered with DOOL updates and our daily recaps, so keep us bookmarked!