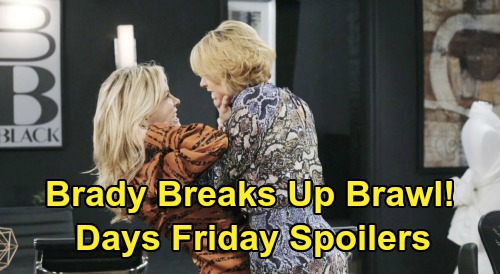 Days of Our Lives (DOOL) spoilers for Friday, March 20, tease that Chad DiMera’s (Billy Flynn) attack will throw Kate Roberts (Lauren Koslow) for a loop. DOOL fans know Chad’s got the letter opener behind his back again, but Kate may spot it at the last second. Chad will find some reason to change his plans, so he’ll grab a bookend and whack Kate in the head with it.

Once Kate’s out cold, Chad will likely drag her down to the secret room. Next, Days of Our Lives spoilers say it’ll be Gabi Hernandez’s (Camila Banus) turn. Chad will strike Gabi somehow and lock her up with Kate, too. It won’t be long until Kate and Gabi are Chad’s hostages, but he’ll probably have to hide that news from Stefano DiMera aka Steve Johnson (Stephen Nichols).

Chad’s under strict orders to kill Gabi and Kate, not just hold them captive. Perhaps this will be a hint of the real Chad breaking through his brainwashing. Chad certainly wouldn’t want to murder Kate and Gabi in his right mind.

Then again, Chad may think there’ll be less of a mess if he lets Gabi and Kate starve in that secret room! Either way, Days spoilers say Kate and Gabi won’t be happy about their new circumstances. 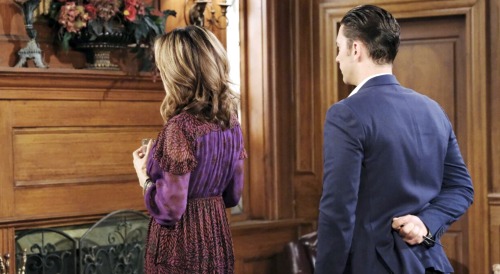 Meanwhile, Stefano will keep trying to get through to Marlena Evans (Deidre Hall). Days spoilers say Stefano will make at least a little progress. Marlena will still have John Black (Drake Hogestyn) in her thoughts and heart, but she’ll manage to bond with Stefano a bit more. Stefano will be pleased, but he’ll realize there’s still work to be done.

Other Days of Our Lives spoilers say Hope Brady (Kristian Alfonso) will have another round of questions for Kayla Brady (Mary Beth Evans). Hope wants all the gory details of what she did during her time as Princess Gina Von Amberg. Although Hope feels terrible about her actions, it’s important for her to know the whole story.

Hope already knows she tried to kill Jennifer Deveraux (Melissa Reeves), so she’ll wonder what other horrible things she did while she was transformed. Kayla won’t want to overwhelm Hope, which means information will continue to trickle out slowly. However, there’s a good chance Hope will get the scoop on Princess Gina’s partnership with Stefano and some of the drama that brought.

Finally, Nicole Walker (Arianne Zucker) will have a fierce faceoff with Kristen DiMera (Stacy Haiduk). Now that Nicole has a DNA sample for Mackenzie “Mickey” Horton, she just needs one for Kristen. It looks like Nicole will kick off this brawl in hopes of pulling out a clump of Kristen’s hair. Of course, the opportunity to let Kristen have it will be a bonus.

Brady Black (Eric Martsolf) will soon jump in and play peacemaker, but he’ll definitely wonder what the heck’s going on! As other updates become available, we’ll have more DOOL info for you. It sounds like this baby swap storyline’s heating up, so stay tuned. Stop by CDL often for exciting Days of Our Lives spoilers, updates and news.