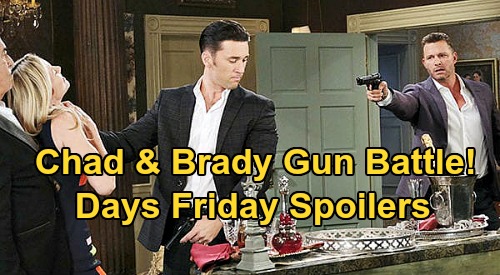 Of course, this divorce isn’t legal, but that doesn’t really matter. John’s more concerned about the next step, which would be consummating this marriage. As a result, Days spoilers say John and Brady will hope to find Stefano’s hideout ASAP. They’ll turn to Hope Brady (Kristian Alfonso) and count on her to pitch in before it’s too late.

Meanwhile, Abigail DiMera (Kate Mansi) will saunter into the secret room and get a big surprise. Gabi Hernandez (Camila Banus) just poured out that Champagne bottle and plans to use it as a weapon. When Abigail appears, Gabi will assume it’s Chad DiMera (Billy Flynn) back to do his worst.

After she whacks Abigail in the head and leaves her unconscious on the floor, Gabi will realize she’s made a horrible mistake. Days of Our Lives spoilers say Kate Roberts (Lauren Koslow) will rush to Abigail’s side and push her to wake up.

Abigail will have quite a bump on the noggin, but she’s going to be just fine. It won’t be long until Abigail awakens and takes the freed hostages upstairs to talk.

Anna DiMera (Leann Hunley) will join this discussion with Abigail, Kate and Gabi. Days viewers know Gabi and Kate have had a lot of time to mull things over, so they’ve figured out this whole brainwashing situation.

Once they fill Anna and Abigail in, new plans will form on how to stop Stefano and break Chad free from this hold his father has on him.

At the new Maison Blanche, Marlena will continue to feel John calling out to her. She’s in her bridal gown and currently hearing John’s voice, but it looks like Marlena will see a vision of John soon.

Days of Our Lives spoilers say John will push Marlena to call off this wedding. Unfortunately, Stefano will still be determined to marry Marlena – and that scheme’s about to bring some explosive moments.

Kristen DiMera (Stacy Haiduk) and Tony DiMera (Thaao Penghlis) just found out about Stefano and Marlena’s upcoming nuptials, so they’ll naturally object on Friday. This ceremony will move forward, but the tension will remain. As things escalate later, Chad will draw his weapon and threaten Kristen.

That’s when Brady will burst in and point his own gun at Chad. DOOL spoilers say Brady will end up taking a bullet by the time Monday’s new episode, March 30, rolls around, so stay tuned. We’ll give you updates as all the action heats up. CDL’s a great place to visit for the latest Days of Our Lives spoilers, updates and news, so check back frequently.