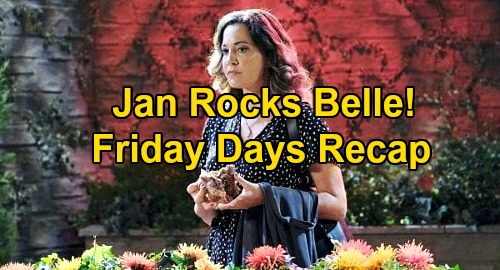 Sarah learned that Orpheus (George DelHoyo) and Clyde Weston (James Read) were among the prisoners who escaped, which scared Sarah after what Orpheus did to Maggie Kiriakis (Suzanne Rogers) earlier this year.

Talk soon turned to Xander Kiriakis (Paul Telfer) and what happened earlier that evening when Xander got jealous over Sarah and Philip having dinner together.

Sarah and Philip were chuckling about the matter when Xander walked in upset over being laughed at. Xander started ranting, and soon Philip made it a point to bring up the fact that Xander once escaped from Statesville with Clyde and Orpheus.

This was news to Sarah, who blustered on about that for a while. Xander just wanted Sarah to go back to bed with him, but Sarah insisted that she’d stay downstairs with Philip while Xander went back to bed.

Sarah said that Xander thinking that she couldn’t have a simple friendship with another man was the last straw, and Xander said that Philip was using Sarah as a pawn. That peeved Sarah, and Xander ultimately left upset.

At the Salem Inn, Clyde quizzed Ben Weston (Robert Scott Wilson) about where he got the gun. Ben explained that it belonged to Vincent Bellman (Michael Teh) and that he took the gun from the Salem PD. Clyde said that he’d take care of Vincent, but Ben said that he had to do it himself because he needed justice.

Then Clyde suggested that Ben let the system handle Vincent, but Ben griped that the system had stuck a needle in his arm. Clyde said that if he went after Vincent, then he’d wind right back up on death row.

Clyde tried to get sentimental with Ben, but Ben didn’t fall for that, either. Finally, Clyde urged Ben to honor Ciara Weston (Victoria Konefal) by living his best life. This moved Ben somewhat.

Clyde said that he wanted Ben to sleep on it, and that he’d be there to check on Ben in the morning. Ben asked where Clyde was going, and if he had a drug deal or a kidnapping to do.

Clyde was tight-lipped about where he was going, but he did promise Ben that he’d be back in the morning, and Ben promised to sleep on it before he made a decision. Clyde took off, and Ben held the gun in his hands.

At the Salem PD, Shawn Brady (Brandon Beemer) and Eli Grant (Lamon Archey) touched base about their search for the prisoners. Lani Price-Grant (Sal Stowers) arrived with the security footage from the DiMera mansion where Wilhelm Rolf (William Utay) had escaped.

As it turned out, someone – presumably Rolf – had erased the footage.

Shawn then saw a missed call from Belle Black (Martha Madison) come in on his phone, and he got an alert from the doorbell camera from Hope Brady’s (Kristian Alfonso) house showing that Jan Spears (Heather Lindell) was at the door 30 minutes ago. Shawn rushed out, upset.

Eli then tried to get Lani to go home and rest, but she wanted to go talk with Kristen DiMera (Stacy Haiduk) in her cell, to see if Rolf reached out. Eli said that there’s no way that Kristen would have heard from Rolf at the police station.

Lani examined some tips, and she saw that someone thought they saw Clyde near the Salem Inn an hour ago. Eli decided to go check it out.

At Hope’s house, Belle told Jan to get out, but Jan reached into her purse and pulled out a crystallized rock. Belle immediately thought that Jan was going to hurt her, but Jan said that the rock was a healing crystal for Claire Brady (Isabel Durant) to help her grieve Ciara.

Belle ordered Jan to get out again, and Jan wondered why Belle was so hostile toward her.

Belle got fed up when Jan told Belle that she was still into Philip, and Belle yelled at Jan about his Shawn will never love her. Jan held the rock up over her head, threatening Belle.

Just then, Shawn rushed in and asked what was going on. Jan put the rock down, and after a few more needling comments about Philip and Belle, Jan left. Later, Belle and Shawn cuddled on the couch and worried about what Jan’s up to now.

In town square, Jan fantasized about having hit Belle over the head with the rock, and to herself she said, “Don’t you dare tell me I’ll never be with Shawn.”

In the park, Claire got a call from Charlie Gale (Mike C. Manning), who was stuck in the office at Titan in the power outage. Claire agreed to come try to get Charlie out of the office, since Charlie didn’t know the password for the security system and didn’t want to call Philip or Xander at this hour.

Claire showed up at Titan and tried to open the office door from the outside, but the door was stuck.

Finally, Charlie pulled on the door while Claire pushed, and the door opened forcefully, flinging Claire into Charlie’s arms. Claire said that it was good that Charlie had her phone number, and Charlie said that he was hoping that she’d go to dinner with him sometime.

Claire agreed, and she suggested that they leave together, but Charlie had to stay and work. Claire left, with Charlie saying that he’d be in touch about dinner.

That was a terrific episode of Days of Our Lives, and we’ll keep you up to speed on any weekend developments about the show, so stick with CDL! Keep checking back with us for all the latest Days of Our Lives spoilers, updates, and news. We’ve got you covered!