BY hellodrdavis on March 29, 2020 | Comments: one comment
Related : Days of Our Lives, Soap Opera, Spoiler, Television 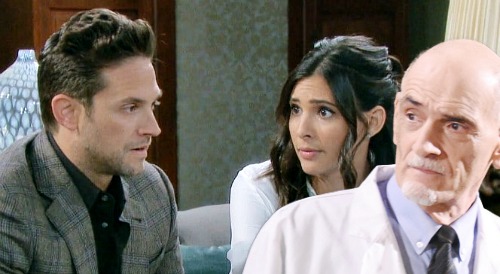 Days of Our Lives (DOOL) spoilers tease that Gabi DiMera (Camila Banus) will have a seriously strange encounter. As DOOL viewers know, Gabi was absolutely devastated when her husband Stefan DiMera (Brandon Barash) passed away and became Julie Williams’ (Susan Seaforth Hayes) heart donor. She was so distraught that she ended up making Lani Price’s (Sal Stowers) life a living hell for the next year.

At the time that Stefan was declared brain dead, Days viewers will remember that Gabi went directly to Dr. Wilhelm Rolf (William Utay) and begged him to do something to save Stefan. Quite understandably, she figured that if Rolf was capable of bringing back others from the dead, then he could bring back Stefan, too.

But Rolf turned Gabi down flat, saying that Stefan’s condition wasn’t right for one of his procedures. Gabi resisted that news at first, but she ultimately accepted it and went on to donate Stefan’s heart to Julie.

But flash forward many months, and DOOL spoilers say that Gabi will have a strange experience that may lead her to suspect that Stefan could have survived.

Gabi will be in a reflective mood, apparently spending some time at Stefan’s gravesite and talking with him tenderly. Later, she’ll be peering into the GabiChic storefront in Town Square when she momentarily sees Stefan’s reflection in the glass.

It will be a stunning moment for Gabi, and she will start to wonder whether there’s any inkling of a possibility that Stefan could have survived.

Exactly what Gabi will do next remains to be seen, but the more she thinks about it, the more she may become determined to find out if there’s any way that Stefan could be out there, having been saved by Rolf after all.

Rolf is capable of a lot of things, both miraculous and devious, and surely he could have found a way to save Stefan. In fact, the more Gabi thinks about the possibilities, the more obsessed with the idea she could become.

What if Rolf managed to whisk Stefan’s lifeless body out of the hospital, and Julie actually got someone else’s heart on the day of her transplant? Rolf could have shuttled Stefan out to a remote location and brought him back to life, where he’s been hiding him ever since.

It seems that Gabi would be wise to find Rolf and start asking him some serious questions – and it’s something that she might find herself compelled to do after she sees Stefan’s reflection in the windowpane. It looks like Gabi will get this feeling that Stefan is out there somewhere – will she go on a mission to find him?

We could see her get her brother Rafe Hernandez (Galen Gering) involved in the search, although he’ll likely think that Gabi’s idea about Stefan surviving is nothing more than wishful thinking.

But then again, when you factor in Rolf and all the DiMera resources that he’s got at his disposal, Gabi’s idea might not be so “out there” after all. It would be great to see Gabi and Rafe team up to investigate Rolf, possibly follow him, and then find evidence that suggests Stefan is alive.

That would really fuel Gabi’s fire and could send her on a major mission to find her missing and presumed-dead husband. We’ll see how it all turns out, but it would be pretty exciting if Gabi were successful in tracking down Stefan and rescuing him from wherever Rolf’s got him stashed.

Of course, given that Rolf’s procedures and treatments tend to have unpredictable effects, it could be the case that Stefan is out there but has amnesia, similar to the situations with Jack Deveraux (Matthew Ashford) and Will Horton (Chandler Massey). And if Gabi’s smart (which she is), she’ll probably figure that Stefan could be in that situation and really need her.

At any rate, Stefan’s return should be exciting no matter how it goes down. How do you think Stefan will end up returning to DOOL? Stay tuned to Days of Our Lives and remember to check CDL often for the latest DOOL spoilers, updates, and news.