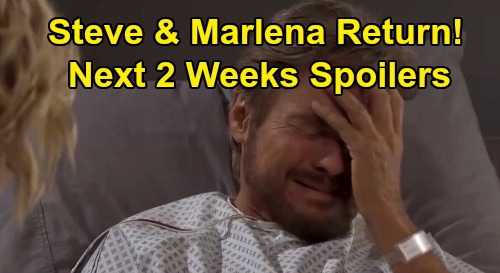 Days of Our Lives (DOOL) spoilers for the next two weeks tease that some tricky situations are on the way. During the week of March 30-April 3, Brady Black (Eric Martsolf) will get shot trying saving Kristen DiMera (Stacy Haiduk). Luckily, the bullet will only manage to graze Brady’s arm. He’ll be able to go about his business just fine, which will lead to a little bonding time with Mackenzie “Mickey” Horton.

After Nicole lies about heading to New York on business, Brady will get updates from Eric Brady (Greg Vaughan). The news will perplex Brady since he won’t know anything about a Basic Black deal. It won’t be long until Eric realizes Nicole must be in New York for another reason, so he’ll need help figuring this out.

While Eric turns to Abe Carver (James Reynolds) for answers, Brady will offer to do some babysitting. Days of Our Lives spoilers say Brady will notice Mickey’s heart-shaped birthmark during their time together.

That’ll spark worries about a switch going down the night Mickey and Rachel DiMera Black were born, but it’ll all seem pretty crazy to Brady at first.

Brady will get caught wondering aloud at one point, but he’ll manage to cover his blunder with Kristen DiMera (Stacy Haiduk). Since Brady will only have a hunch and he’ll even doubt it himself, he just won’t think he should tell Kristen anything – not until he’s sure.

Daniel Jones (Shawn Christian) will also return from the “dead,” but only for this one DOOL episode. There’ll be some funny scenes as Daniel shows on Nicole’s doorstep. Eric will get caught in the mess, so stay tuned for some hilarious drama.

During the week of April 6-10, two characters will be hospitalized and transformed. Marlena Evans (Deidre Hall) will undergo surgery, so John Black (Drake Hogestyn) will get “Doc” back to normal soon. Over with Stefano DiMera aka Steve Johnson (Stephen Nichols), Kayla Brady (Mary Beth Evans) will do something daring to make sure Steve inhabits his mind and body again.

Unfortunately, an unexpected surgery snag will pop up. Kayla and Sarah Horton (Linsey Godfrey) will have to deal with a complication they didn’t see coming.

Later, Days spoilers say Steve will indeed awaken, but he may not completely be himself just yet. The surgery complication will lead to some issues to work through.

Back with Eric, he’ll confront Nicole about her trip to see Dr. Raynor (Victoria Platt) and get confirmation on the baby swap. Nicole will come clean about flying to New York to score Dr. Raynor’s confession – and she’ll indeed get that confession. Once Nicole reveals what she knows and how she knows it, a devastated Eric will struggle over what to do with this info.

Next, Days of Our Lives spoilers say Sarah’s life will be turned upside down. Xander Kiriakis’ (Paul Telfer) wild dream may offer a sneak peek at the Mickey horror, but the actual big reveal’s coming sooner or later. Whether Eric tells Sarah the truth or someone else does, hearts are about to get broken!

Speaking of broken hearts, Justin Kiriakis (Wally Kurth) will have one of those soon. After Steve’s back, his reunion with Kayla will be inevitable. Justin will just have to accept that a “Stayla” reunion is happening.

Other Days spoilers say Ben Weston (Robert Scott Wilson) and Ciara Brady (Victoria Konefal) will mull over some job ideas. They’ll focus on their careers as well as their personal lives in these upcoming scenes.

It appears Ben will even blurt out a marriage proposal, so “Cin” will really be over the moon. Ciara and Ben will feel like nothing can stop them from living a beautiful life together.

The next two weeks should pack in plenty of DOOL action. Be sure to stop by CDL again soon for other sizzling Days of Our Lives spoilers, updates and news.