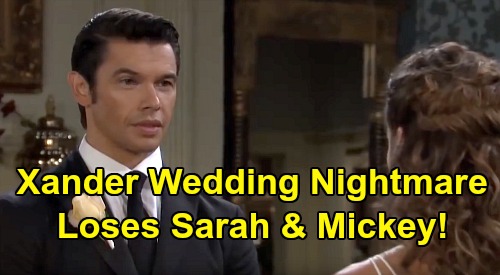 Days of Our Lives (DOOL) spoilers tease that Xander Kiriakis (Paul Telfer) will try to convince himself that his nightmare’s over. DOOL fans know Xander grew concerned about the threat Nicole Walker (Arianne Zucker) posed. Xander decided to pay off the lab tech and make sure the DNA results said what he wanted. In the end, Nicole apologized for her mistake and pretended she was moving on.

Of course, that’s not what Nicole’s really doing, but she’ll hope to keep Xander in the dark on her mission to find Dr. Raynor (Victoria Platt). The doc was in on the baby switch and may be Nicole’s only hope for some form of proof. As for Xander, he’ll do his best to believe that his nightmare’s over.

Unfortunately, Xander will end up having a literal nightmare instead – one about his true love, Sarah Horton (Linsey Godfrey). Days of Our Lives hasn’t released the details of this nightmare just yet, but it’s sure to be disturbing. DOOL viewers can expect Xander to awaken in a panic after this dream, so it should really leave him reeling.

Since this wedding probably isn’t going to happen, this might be a good opportunity for Days to do a wedding fantasy. Xander might dream about the baby swap truth coming out at their nuptials. In reality, the switch secret should be unleashed long before Sarah and Xander have a chance to tie the knot.

Of course, even just an average day would be a horrible time for Xander to face Sarah’s wrath. Days fans know Xander’s got everything he could ever want. Sarah loves Xander and truly appreciates him. She wants to build a life with Xander and Mackenzie “Mickey” Horton, so Xander’s got his favorite girls and never intends to let them go.

Sadly, Xander should lose both Sarah and Mickey due to the upcoming bombshell. Mickey is really Rachel DiMera Black, so she’ll go back to her biological parents – Brady Black (Eric Martsolf) and Kristen DiMera (Stacy Haiduk).

Sarah will surely be furious with Xander, who assured her there’d be no more secrets. Xander’s been keeping the worst secret Sarah could possibly imagine instead.

Days of Our Lives spoilers say Xander’s dream should offer a little preview of what’s to come. Sarah may lash out and leave Xander even more determined to make sure his cover-up’s solid. Too bad it’s not! The clues will start coming together for several Salemites, so Xander’s devious actions will ultimately be exposed.

It sounds like some crazy drama’s ahead on the NBC soap. We’ll pass along Days updates as other news becomes available. CDL’s your hotspot for DOOL details, so don’t forget to check back frequently for sizzling Days of Our Lives spoilers, updates and news.