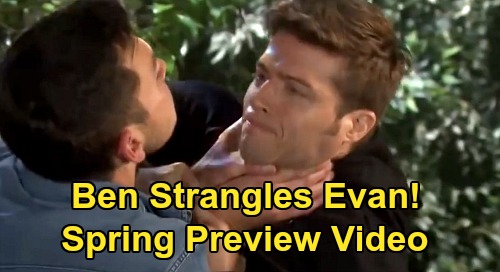 Days of Our Lives (DOOL) spoilers tease that there’s plenty of action in store this spring on the NBC soap. The new DOOL spring preview video promises lots of romance, adventure, family moments, and a Stefan DiMera (Brandon Barash) sighting, so you won’t want to miss it. It’s a great preview of what’s to come this spring on the show, and we’ve got all the details for you right here.

First off, viewers can expect Ben Weston (Robert Scott Wilson) to find himself in a challenging position. As DOOL viewers know, he’s just been released from prison and has had a happy reunion with Ciara Brady (Victoria Konefal).

But sooner or later he was bound to run into his sister’s killer, Evan Frears aka Christian Maddox (Brock Kelly). And their interaction could be more than Ben can handle!

The spring preview video shows Ben and Ciara encountering Evan in the park, with Ben seriously roughing up Evan, and even looking like he’s tempted to strangle him!

This will be a real test for Ben, whose rage may take over and unleash his killer instinct once again. Ciara is shown looking on, worried, so she may put a stop to this scene. At any rate, Ben’s going to have some choice words for Jordan Ridgeway’s (Chrishell Stause) murderer.

Next, the spring preview video shows John Black (Drake Hogestyn) bursting into the bedroom at the new Maison Blanche and getting an eyeful of Stefano DiMera aka Steve Johnson (Stephen Nichols) and Marlena Evans (Deidre Hall) on the bed.

“Get your paws off of my wife,” John drawls as he witnesses the scene. We suspect that a brawl will ensue, and the good news is that it looks like John has arrived in the nick of time.

Well, the action will soon move back down to the main room in Maison Blanche, as the spring preview video shows Stefano there with Tony DiMera (Thaao Penghlis) and Anna DiMera (Leann Hunley).

In one swift motion, Anna takes matters into her own hands and attacks Stefano with her stiletto! According to DOOL spoilers, she’ll actually gouge Stefano’s eye out, and he’s heard in the video crying out in pain. Go, Anna!

The spring preview video next turns to some nice family moments. Hope Brady (Kristian Alfonso) is shown in Town Square telling Jennifer Deveraux (Melissa Reeves) how much she loves her.

Of course, DOOL viewers know that Hope feels horribly about how she put Jennifer into a coma during her tenure as Princess Gina Von Amberg (Kristian Alfonso), and she’ll want to make sure she and Jennifer are in a good place now.

Then, DOOL viewers will be treated to some nice scenes with Nicole Walker (Arianne Zucker), Eric Brady (Greg Vaughan), and Holly Jonas (Scarlett and Harlow Mallory).

These three are shown sitting on a park bench together in a nice family scene, when Holly hugs Eric and tells him, “I love you, Daddy.” Both Eric and Nicole look touched by the little girl’s words, and it will be a feel-good moment.

Next, DOOL viewers can expect Steve to return in full form. It appears that Dr. Wilhelm Rolf (William Utay) will be forced to reverse the procedure that turned Steve into Stefano, but things won’t be easy for Steve when he returns.

It should be tough to watch as Steve comes to terms with everything that happened while he was running around as Stefano. Of course, he’ll also have to be told that Kayla is in a relationship with Justin Kiriakis (Wally Kurth) as well, which should be a devastating blow.

And even Lani Price (Sal Stowers) made the “chisel” portion of the video, as she’s shown wearing very little and engaged in a pillow fight with Eli.

Finally, the spring preview addresses a situation that many DOOL fans have been waiting for…the return of Stefan. Gabi Hernandez (Camila Banus) is shown at Stefan’s gravesite, telling him, “I just wish that you were here to share this joy with me.”

Gabi’s been through a lot in the past year, with her near-marriage to Eli and her public “outing” over blackmailing Lani, but it seems that she hasn’t forgotten Stefan.

Gabi is next shown outside the storefront at GabiChic and looking in the windowpane, when she sees Stefan’s reflection in the glass. Tentatively, she says, “Stefan?”

But what will happen when she turns around? DOOL spoilers indicate that Stefan won’t be there, but that Gabi will start to feel like perhaps Stefan could have survived his ordeal – and it’s not that crazy of an idea when you consider the other things that Rolf has pulled lately!

It looks like we’re in for some great action this spring, so keep watching Days of Our Lives for all the latest developments. We’ll be sure to give you updates as DOOL news comes in. Stick with the NBC soap and know that CDL is your place for all the latest DOOL updates, news, and spoilers.