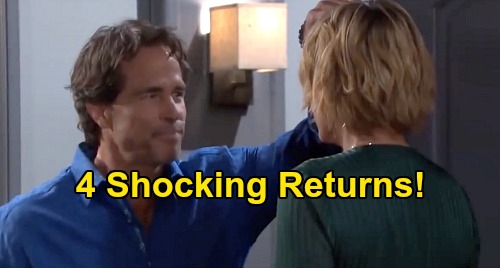 Days of Our Lives (DOOL) spoilers tease that the NBC soap has a special April Fool’s Day episode lined up this year. DOOL viewers will remember that the show did something similar for last year’s special Halloween episode, which was a standalone episode full of wacky mayhem. Well, the April Fool’s episode appears to have some shocking returns from key characters from the past.

In fact, the DOOL spring preview video offered some insight into these characters’ returns. The first will be Leo Stark (Greg Rikaart), who is shown in the video appearing on the doorstep of the Kiriakis mansion and gleefully greeting Will Horton (Chandler Massey) and Sonny Kiriakis (Freddie Smith). “I’m back!” Leo croons to Will and Sonny, who look less than pleased to see him.

Of course, a guy from Sonny’s past is the last thing that “WilSon” needs right about now. They’re currently dealing with the fallout from Sonny’s short-lived relationship with Evan Frears aka Christian Maddox (Brock Kelly), and Will is being very understanding about that, but they really don’t need Leo coming out of the woodwork right now. Leo’s nothing but trouble!

We should note that Leo is dressed in a characteristically loud suit, and DOOL spoilers say that he’ll have some sort of intriguing proposition for Sonny and Will. We’ll see what that ends up being, but it should be something pretty “out there,” since this is Leo we’re taking about and it’s the April Fools Episode to boot.

The next big DOOL return is a huge shocker, given that it’s Daniel Jonas (Shawn Christian), who died back in 2016 of injuries sustained in a car accident caused by Eric Brady (Greg Vaughan).

Of course, Daniel was romantically involved with Nicole Walker (Arianne Zucker) and the two share a daughter, Holly Jonas (Scarlett and Harlow Mallory).

Will Daniel march on in the apartment and make himself at home? And how will he get along with Eric, given Eric’s involvement in Daniel’s death?

Another big return for the April Fool’s episode will be Sheila Watkins (Tionne Watkins), who was last seen during last year’s mayoral race in Salem. As DOOL viewers will remember, Sheila left after Jack Deveraux (Matthew Ashford) exposed video footage of Sheila’s kiss with her then-boss Abe Carver (James Reynolds). It caused a stir and Sheila decided to just leave town and spare Abe any more scandal.

But this time around, DOOL spoilers say that Sheila will be back looking for her good friend Eli Grant (Lamon Archey). She’ll have a big surprise for Eli – could the April Fool’s joke possibly be that Sheila returns with a baby in tow, claiming it belongs to Eli?

That would certainly be a big bomb to drop on Eli right about now, especially since he’s happily reunited with Lani Price (Sal Stowers)!

Finally, the new DOOL spring preview video shows a quick scene of Rex Brady (Kyle Lowder) sitting by himself and on the phone. Of course, the last we saw of Rex, he was leaving Salem because his fiancé Sarah Horton (Linsey Godfrey) was in love with his brother Eric. Rex then moved to Chicago to be closer to his daughter with Mimi Lockhart (Farah Fath).

Now, whether Rex is returning as part of the special April Fool’s Day episode, or whether he’ll be returning “for real” on the show remains to be seen. But either way, it will be good to see Rex back in action!

Are you looking forward to seeing Leo, Daniel, Sheila, and Rex back on the show? Stay tuned to the NBC soap and keep up with all the latest Days of Our Lives spoilers, updates, and news at CDL.