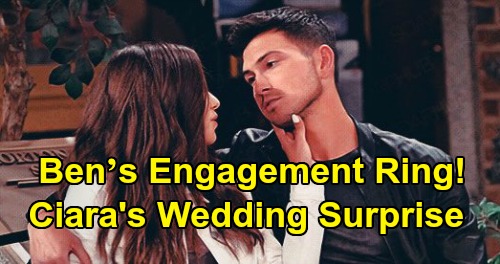 Days of Our Lives (DOOL) spoilers tease that Ben Weston’s (Robert Scott Wilson) luck is about to turn around. During the week of March 30-April 3, Ben and Ciara Brady (Victoria Konefal) will consider their future. They took some time to just be in the moment after Ben’s release from prison, but now it’s time to think about what’s next.

Ciara and Ben will once again voice their total commitment to each other. They’ve both made it clear that this is a forever kind of love. Ben feels like he never really started living until he met Ciara. He views Ciara as the love of his life and that’s exactly how Ciara views Ben, too. Ciara assured Ben she’d never feel the same way about anyone else.

Days of Our Lives spoilers say Ben and Ciara will mull over plans for their new chapter. Will “Cin” discuss marriage and perhaps the kids they’d like to have one day? This should serve as a great opportunity to share their thoughts without pressure or judgment.

Ciara and Ben aren’t in any hurry to accomplish everything immediately. This is just a time to reflect on how far they’ve come and prepare for what’s ahead. Days spoilers hint that career goals may be part of this discussion, too.

DOOL viewers can expect a joint job search for Ben and Ciara during the week of April 6-10. They’ll both be on the hunt for brand-new positions – possibly at the same place of employment. Once they have that squared away, hopefully Ben can get Ciara an engagement ring. Ben will lock in a steady income, so that’ll put him a step closer to this proposal goal.

Days of Our Lives spoilers say Ben will indeed pop the question at some point, so everything’s really falling into place for this couple. It’s nice to have at least one duo that’s currently on cloud nine.

There’s often a lot of doom and gloom on soaps – and “Cin” fans have certainly had to endure some throughout Ben’s prison ordeal. The poor guy was nearly executed for a crime he didn’t commit!

Although Ben made some deadly mistakes when he was mentally ill, he’s turned his life around and deserves the good things headed his way. Ciara also deserves a reward for fighting so hard to save her man.

Days spoilers say Ben and Ciara will have some engagement news to spread soon enough. From there, they can plan the wedding and get ready for the rest of their lives together.

We’ll deliver DOOL updates as other info becomes available. Are you rooting for Ben and Ciara? Do you hope their happiness lasts for a while? CDL’s the place to be for the hottest Days of Our Lives spoilers, news and updates.