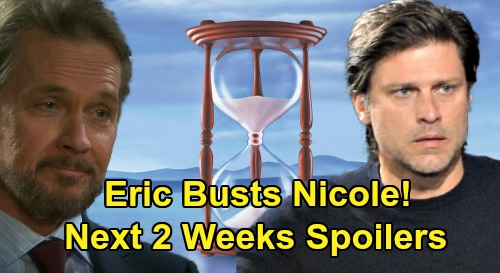 Days of Our Lives (DOOL) spoilers for the next two weeks tease that some big moments are ahead in Salem. During the week of March 23-27, Ben Weston (Robert Scott Wilson) will finally be a free man. He’ll be able to enjoy a real reunion with Ciara Brady (Victoria Konefal) – and things will get awfully steamy!

“Cin” fans can expect some sudsy fun as Ben and Ciara get hot in the shower. They’ll make love and celebrate their bright future, but not everyone will be having a great week.

Gabi Hernandez (Camila Banus) and Kate Roberts (Lauren Koslow) will be having one of the worst! They’ll wind up stuck together in the DiMera secret room, so they’ll have to make the best of it for a while.

Later, Abigail will be in for a shock down in the tunnels. When Abigail walks through the door, Gabi will knock her out with a Champagne bottle.

Naturally, Gabi won’t mean to attack someone who could’ve helped! It’ll just be a case of confusion that ends in disaster. Over with Stefano DiMera aka Steve Johnson (Stephen Nichols), he’ll propose to Marlena Evans (Deidre Hall) and spread the word about their impending nuptials.

Over with Nicole Walker (Arianne Zucker), her DNA test plan will go awry. Xander Kiriaks (Paul Telfer) will alter the results, so Kristen won’t be a match for Mackenzie “Mickey” Horton on paper.

Nevertheless, Days of Our Lives spoilers say Nicole won’t be able to let this go. After Nicole confides in Abe Carver (James Reynolds), she’ll decide she has to keep seeking the truth.

During the week of March 30-April 3, Eric Brady (Greg Vaughan) will realize something upsetting. He’ll discover that Nicole lied to him and will eventually confront Abe. Sigh. Really, Days?

We’re doing the whole “Nicole keeps a secret from angry Eric” thing again? This story has been done to death, but the damage hopefully won’t be as bad this time.

DOOL viewers know Nicole isn’t keeping this secret to hurt Eric or for selfish gain. Nicole’s just making sure she’s got her facts straight before she blurts out baby swap accusations.

It’s true that Nicole probably should’ve opened up already, but it’ll be irritating if Nicole faces too much blame for this. She’s trying to do the right thing here!

At Stefano and Marlena’s wedding, total mayhem will erupt. Brady Black (Eric Martsolf) will end up shot before Stefano gets wounded himself. Anna will wreak havoc after she injures Stefano and plots her next move.

As for John Black (Drake Hogestyn), Stefano will want him out of the way for good. Days of Our Lives spoilers say John will push Marlena to kill John, so she’ll have to fight that mind control.

Speaking of mind control, Abigail will try to break the spell Stefano put on Chad. It’s not going to be easy, but Abigail will hope the power of love can bring brainwashed Chad back.

Days fans can also expect April Fools’ Day fun as a break from all the drama. It looks like some great stuff’s coming up, so we’ll give you updates as other DOOL info emerges. Don’t forget to pop in CDL regularly for hot Days of Our Lives spoilers, updates and news.