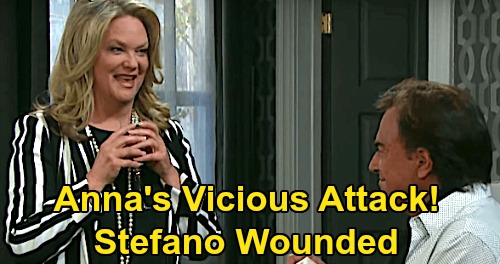 Days of Our Lives (DOOL) spoilers tease that Anna DiMera (Leann Hunley) will get back in the action with some exciting new stories. For starters, Anna will help Abigail DiMera (Kate Mansi) as she tries to get to the bottom of her suspicions. Once Abigail’s back in town, it won’t take her long to realize something is seriously off with Chad DiMera (Billy Flynn).

Abigail will confide her concerns to Anna, who will pick up on the changes as well. Chad just won’t be acting like himself, so Anna and Abigail will come together for a discussion. They may think this has Stefano DiMera aka Steve Johnson (Stephen Nichols) written all over it!

DOOL fans know Chad’s been brainwashed by Stefano, so he’ll do just about anything his father tells him right now. Chad’s extreme loyalty will definitely raise some red flags for Abigail.

There’s also the matter of Chad’s insistence that Stefano is really Stefano. Chad no longer seems bothered by Stefano inhabiting Steve’s mind and body, so Abigail should be upset about that since Steve’s her uncle.

Anna will do her best to be there for Abigail, but she’ll also get tangled up in the Stefano mess another way. Days spoilers say Stefano will announce his wedding plans during the week of March 23-27. The news will leave Tony DiMera (Thaao Penghlis) troubled, so he’ll surely confide in Anna. It looks like Anna will be on hand as Tony’s plus one at the upcoming ceremony.

That should be important once the nuptials explode. Days viewers can expect some shockers as John Black (Drake Hogestyn) fights to save Marlena from Stefano’s clutches. Brady Black (Eric Martsolf) will get shot during all this mayhem – presumably through his involvement in Marlena’s rescue mission.

However, Brady won’t be the only one who gets wounded. During the week of March 30-April 3, Days of Our Lives spoilers say Anna’s attack will leave Stefano injured. Will Anna shoot Stefano after he shoots Brady? Could Anna cause a fall for Stefano or even stab him?

There are plenty of ways for Anna to wound the devious DiMera in desperation. Between all the Chad drama and this wedding nightmare, Anna will believe Stefano must be stopped!