Days of Our Lives Spoilers: Ben’s Deadly Evan Confrontation – Goes After Jordan’s Killer With A Vengeance? 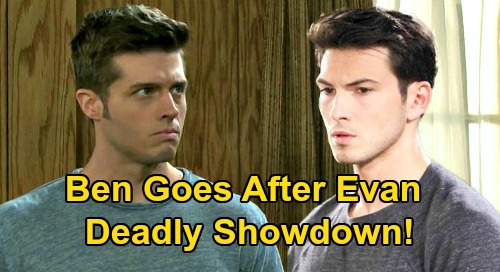 Days of Our Lives (DOOL) spoilers tease that Ben Weston (Robert Scott Wilson) will soon get some good news. He was pretty upset when he found out from Ciara Brady (Victoria Konefal) that the confession of Evan Frears aka Christian Maddox (Brock Kelly) was tossed out on a technicality. That doesn’t automatically mean that Evan will go free forever, but it will surely make it more difficult to prosecute him.

However, in the coming days, Ben will get something more positive to focus on. According to Days of Our Lives spoilers, the day Ben thought he’d never see will actually come – he’ll finally be released from prison for the murder of his sister, Jordan Ridgeway (Chrishell Stause). He’ll get to walk away a free man, and he’ll happily reunite with Ciara.

DOOL fans should look for some nice, happy scenes as Ciara and Ben enjoy some romance and revel in their time together. But we can’t help but wonder about what’s going to happen next with Ben, given that the man who really killed Jordan will be walking around free in Salem, too. At some point, Ben is going to run into Evan.

In fact, Ben might make it a point to have a good talk with Evan asap. After all, Ben is going to be deeply concerned about his nephew David Ridgeway (Caleb and Kyler Ends).

As DOOL viewers know, David is currently missing and is being cared for by both Evan and his father Orpheus (George DelHoyo) on the sly. And since Orpheus is the master at laying low and staying undetected, it could be a while before anyone finds David.

It certainly doesn’t seem like Evan is going to give up David’s location anytime soon, and that’s probably going to put some major tension between him and Ben. It would be interesting to see these two men – both of whom have murdered in the past – go up against each other.

Ben might have some serious threats for the man who murdered his sister, and it could even become difficult for him to constrain his temper around Evan.

But of course, Ben will want to be careful with his threats and behavior, given that he doesn’t want to wind up under suspicion in the event something happens to Evan down the line.

But it might be tough for Ben to hold back his rage if he does confront his sister’s murderer. It might also make him feel deep empathy for what his victims’ families went through when their lives were cut tragically short.

Whatever the case, it should bring up some difficult feelings for Ben when he finally confronts Evan. And we could also note that Ben is going to also be deeply worried about the well-being of his nephew David during all of this as well. Just like Rafe Hernandez (Galen Gering), he’ll probably be incensed that Evan knows where David is but isn’t telling.

What do you think? Are you looking forward to seeing Ben go up against Evan? Keep watching Days of Our Lives and remember that CDL is your place for the latest DOOL updates and spoilers. We’ll be sure to keep you up to date on the latest DOOL news going forward.