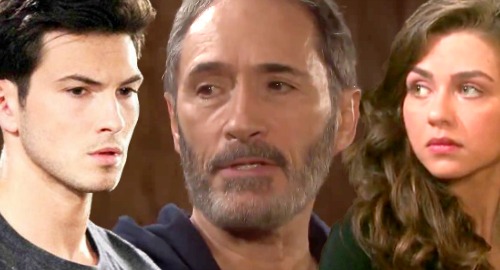 Days of Our Lives (DOOL) spoilers tease that little David Ridgeway (Jaxton and Dexter Ellis) has been through a lot in his short life. As DOOL viewers know, he lost his mother, Jordan Ridgeway (Chrishell Stause) last year, but then seemed to settle very well into Rafe Hernandez’ (Galen Gering) care. Rafe nearly adopted him, and then all heck broke loose when it was revealed that David’s trusted “manny” Evan Frears aka Christian Maddox (Brock Kelly) was David’s biological father.

And to make matters even worse, it turned out that Evan was the person who murdered Jordan. If all that wasn’t enough, now David has been kidnapped by Evan, and DOOL viewers have learned that Evan is the son of supervillain Orpheus (George DelHoyo). That means that David is Orpheus’ grandson, and soon that fact will become known to Rafe and everyone else who cares about David.

Well, the hunt is already underway to find baby David, but Evan’s certainly not going to give up his location to Rafe, so it’s not going to be an easy search. And things will feel even more urgent for Rafe when he learns the connection between Orpheus and David. He’s going to want to protect David at all costs.

Of course, there’s someone else in the picture who will be concerned about David as well, and that’s his uncle Ben Weston (Robert Scott Wilson). Right now, Ben’s still in prison, but according to DOOL spoilers, he’ll be released soon, and he’ll get the terrible news that David is unaccounted for. That could lead Ben to join Rafe’s hunt for David – after all, Ben has always cared about the little boy.

Of course, eventually David will be found, but what’s going to happen to him then? Evan and Orpheus are going to want to stake their claim on him for sure, but Rafe and Ben will surely want them to have nothing to do with the kid. And if Evan manages to walk on the murder charges, then he’s the biological father and would have legal rights to David.

If it goes that way, it could lead to some tension between Ben and Evan, and between Ben and Orpheus. Of course, Orpheus is a wanted criminal and it’s not like he can step in and legally offer to raise David, but he could certainly go after Ben if he threatened to take David away from Evan down the line. That means that we could see Ben the serial killer versus Orpheus the mastermind criminal. That could get interesting!

We’ll see what happens here, but a decision will have to be made at some point about where David will end up and who will raise him. It could be Evan, Rafe, or Ben along with Ciara Brady (Victoria Konefal). Who do you think will wind up caring for David?

Stay tuned to the great DOOL drama that’s headed your way, and we’ll keep you up to date as more news and spoilers come in. Remember, CDL is your place for all the latest on Days of Our Lives, so check back with us often.