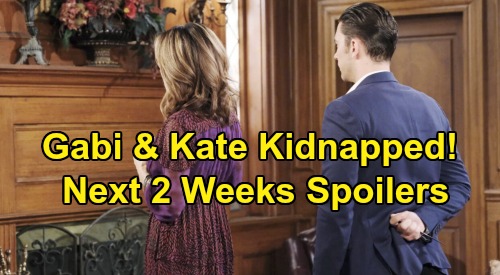 Days of Our Lives (DOOL) spoilers for the next two weeks tease that some stunning revelations are in store. During the week of March 16-20, Clyde Weston (James Read) will get some news that leaves him taken aback. When Ben Weston (Robert Scott Wilson) mentions Evan Frears’ (Brock Kelly) real name, Clyde will recognize it. He’ll recall talking to Orpheus (George DelHoyo) about his son, Christian Maddox.

Ben will wonder if Clyde put Evan in Jordan Ridgeway’s (Chrishell Stause) to kill her, but his dad will insist that wasn’t the case. Clyde will make it clear that he never knew Evan would commit murder. Even so, Days spoilers say Clyde played a role in how Evan and Jordan met. He may feel a little guilty about Jordan’s grim fate.

At the hospital, Hope Brady (Kristian Alfonso) will get back to her old self. After Princess Gina Von Amberg fails to convince Dr. Wilhelm Rolf (William Utay) to change his plans, her chip will be removed. Once Hope awakens and starts putting the puzzle together, she’ll want answers about all the time she missed.

Days of Our Lives spoilers say Hope will be crushed over her attempt to kill Jennifer Horton (Melissa Reeves). She certainly won’t be happy about all the other destruction she caused either, but none of this is Hope’s fault. Hope was under mind control – and so is Chad DiMera (Billy Flynn), who’s about to carry out another round of dangerous orders.

Stefano DiMera aka Steve Johnson (Stephen Nichols) will urge Chad to go after Kate Roberts (Lauren Koslow) and Gabi Hernandez (Camila Banus) again. Days spoilers say Chad will knock Kate out before attacking Gabi as well. DOOL fans can expect Chad to trap them together, so they’ll probably find themselves in the DiMera secret room during the week of March 23-27.

While Gabi and Kate face a hostage situation, Abigail DiMera (Kate Mansi) will return home and battle suspicions. Anna DiMera (Leann Hunley) will agree that Chad just isn’t acting like himself. Days of Our Lives spoilers say Abigail and Anna may compare notes as they try to figure this mess out.

Since Abigail will make a huge discovery a bit later, she may find captive Kate and Gabi. Next, Ben will walk free from prison and enjoy a romantic celebration with Ciara Brady (Victoria Konefal). This DOOL couple deserves some long-awaited bliss!

Other Days of Our Lives spoilers say Stefano will make plans to marry Marlena Evans (Deidre Hall), which she’ll be on board with. At the same time, part of Marlena’s always going to love John Black (Drake Hogestyn). She’ll feel drawn to John as he tries to find her, but Stefano’s pull will be powerful as well. It’ll be a real battle between Marlena’s transformed brain and her heart.

As for Nicole Walker (Arianne Zucker), she’ll await proof regarding her baby swap suspicions. Nicole will grow increasingly fearful about Mackenzie “Mickey” Horton being Rachel DiMera Black, but she’ll have someone to confide in. Abe Carver (James Reynolds) will listen to Nicole as she describes some of her concerns.

Speaking of concerns, there’ll still be some surrounding the Orpheus mess. Sonny Kiriakis (Freddie Smith) will urge Evan to make things right and give David Ridgeway (Caleb and Kyle) back to Rafe Hernandez (Galen Gering). Rafe should indeed get David back eventually, but he’ll have to deal with Orpheus first!

As other details come in, we’ll have more DOOL updates to pass along. The next two weeks will bring plenty of fantastic drama, so stay tuned. CDL’s your hotspot for all the latest Days of Our Lives spoilers, updates and news posts.