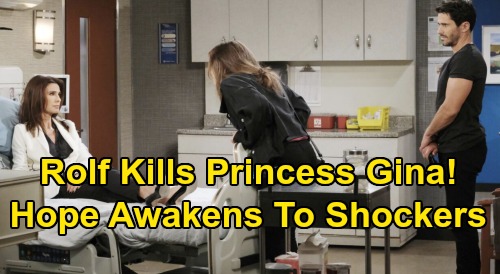 Days of Our Lives (DOOL) spoilers tease that Princess Gina Von Amberg (Kristian Alfonso) will make one final plea to Dr. Wilhelm Rolf (William Utay). She’ll want Dr. Rolf to save her from a terrible fate, which involves being turned back into Hope Brady. Of course, this will essentially kill Princess Gina. She’ll cease to exist, so it’s easy to see why she’ll be reeling as her procedure draws near.

Dr. Rolf should sympathize with Princess Gina on some level, especially since she’s his creation. However, there won’t be any reason for Princess Gina to remain in Hope’s mind and body.

Chad DiMera (Billy Flynn) will break through his brainwashing just a bit and urge Dr. Rolf to make this right. Since Princess Gina is no longer helpful, Chad won’t see why Dr. Rolf shouldn’t reunite Hope with her family.

Days of Our Lives spoilers say Kayla Brady (Mary Beth Evans) will prep Hope for surgery, and Prince Gina’s death, which it seems Dr. Rolf will perform. Kayla will likely supervise that since Dr. Rolf can’t exactly be trusted! Regardless, Hope will soon be back to her old self and that means some shocking revelations are on the way.

DOOL fans can expect Hope to awaken after well over a year dormant. She’s been completely out of the picture, so it’s almost like she was stuck in a coma along with Jennifer Horton (Melissa Reeves).

Days spoilers say Hope will reel when she learns Dr. Rolf transformed her into Princess Gina. She’ll naturally hate all the despicable things she’s done – like trying to murder Jennifer.

Kayla and Jennifer will ultimately pass along even more devastating news. There’s a good chance that involves Adrienne Kiriakis’ (Judi Evans) death. Adrienne was beloved by almost everyone in town, so Hope’s no different.

Hope will naturally be crushed for Justin Kiriakis (Wally Kurth), Sonny Kiriakis (Freddie Smith) and everyone who suffered through this tragedy.

Days of Our Lives spoilers say Hope will get updates on Ciara Brady’s (Victoria Konefal) fierce battle, too. She’ll inevitably learn how hard Ciara fought to get Ben Weston (Robert Scott Wilson) off the hook.

Hope will also be brought up to speed on Will’s prison ordeal and the one Maggie Kiriakis (Suzanne Rogers) is now facing. She’ll have so much to catch up on, so her head should be spinning!

Are you glad Hope will soon be back to normal? We’ll have DOOL updates to offer as other Days news comes in. If you’re looking for more Days of Our Lives spoilers, be sure to pop back in CDL frequently.