Days of Our Lives Spoilers: Will Ben and Ciara Adopt David – Who Should Get Custody of Jordan’s Son – Rafe Not Blood, But Ben Is 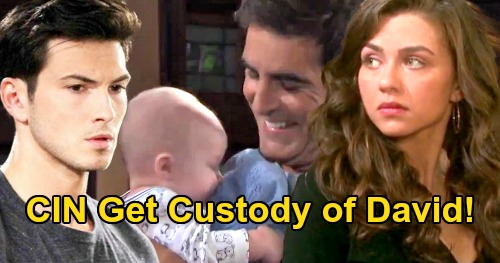 Days of Our Lives spoilers reveal there could be a custody complication for Rafe Hernandez (Galen Gering). He planned on adopting David Ridgeway (Caleb Ends and Kyler Ends), but now there is new information that could change everything. The child has blood relatives and while they might not be stable, could there be another family member interested in adopting the boy?

DOOL spoilers reveal that David is still missing. One day he was in Rafe’s home and the next, Evan/Christian had hidden him. It is speculated that the child is with the fake nanny’s biological father, who could be the soap supervillain Orpheus (George DelHoya).

It is teased that more people will join the search for David, including Eli Grant (Lamon Archey) and Lani Price (Sal Stowers). However, there is still the issue of custody.

Evan/Christian is David’s biological father and despite being a murderer, he has not been convicted yet. Until then, a court could rule that the adoption be postponed and worst-case scenario, the killer could actually get visitation.

However, there is another twist to this story that could happen in the near future. It has to do with other family members of David petitioning the court for custody.

Days of Our Lives spoilers indicate Ben Weston (Robert Scott Wilson) could eventually be cleared of killing Jordan Ridgeway (formerly Chrishell Strause). When that happens, it will make him a possible guardian for David. After all, courts do prefer to give children to family members rather than someone who isn’t blood-related.

Considering Evan/Christian’s past, it is unlikely he would get custody. This is especially true because there are three witnesses to him pointing a gun at Sonny Kiriakis (Freddie Smith). We also can’t dismiss that in the future, he could face possible kidnapping charges.

Days of Our Lives Spoilers: Family Member Gets Custody?

There is a possibility that after being cleared, Ben and Ciara Brady (Victoria Konefal) could end up getting married. While we would love to see “Cin” babies, what if the couple decides to take in and adopt David? Ben is family and while the child has bonded with Rafe, a court might look more favorably on “Cin.” Not only will they be a two-parent household, but Ben is blood.

If fans recall, when Jordan was still alive and trying to prove her ability to be a good mother, Ben bonded with the child. He bought him gifts, went all-out building him custom toys and truly fell in love with the little guy. Perhaps there was a reason this was played out on screen. Even Ciara was included in that storyline, and it seems both would take care of David as if he were their own.

Don’t get us wrong, we love Rafe and think he’s been amazing with David. However, Gering is leaving the soap. Could he end up taking David with him or is the reason for his exit because he can’t handle seeing David be raised by anyone besides himself? We will have to wait and see how this storyline develops.

Don’t miss all our hot Days of Our Lives spoilers here at CDL. We’ll pass along plenty of updates as other DOOL news rolls in.