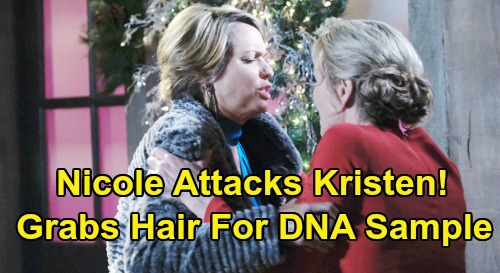 Days of Our Lives (DOOL) spoilers tease that Nicole Walker’s (Arianne Zucker) suspicions will grow – and she won’t be happy about them! After Nicole realizes Mackenzie “Mickey” Horton has a significant birthmark, she’ll start to flip out. Since Rachel Isabella DiMera Black had the same birthmark on her neck, Nicole will know this spells trouble.

DOOL viewers know Nicole’s been curious about Xander Kiriakis’ (Paul Telfer) link to Dr. Raynor (Victoria Platt). Although Dr. Raynor tried to hide the truth, Nicole seemingly just can’t shake the feeling that something’s off. That feeling will become even harder to shake thanks to this birthmark situation.

Days of Our Lives spoilers say Nicole will come to the logical conclusion that the babies may have been swapped that night. Of course, Nicole’s going to need some DNA evidence, but how will she get it? Based on latest info, it looks like Nicole may attack Kristen DiMera (Stacy Haiduk) with a goal in mind – or at least use it to her advantage in the aftermath.

Nicole will end up starting a fierce fight with Kristen during the week of March 16-20. Things will get awfully catty as Nicole and Kristen hurl insults at each other. Kristen won’t realize Nicole could be the one to provide a mother-daughter reunion! First thing’s first though…we have to get that DNA proof.

Days of Our Lives spoilers say Nicole will grab Kristen’s hair during this intense faceoff. Will she pull out a clump and use it as a DNA sample? That’s certainly an option to consider. Whether that’s Nicole’s plan from the start or not, it should be a strong possibility once Nicole’s got hair in her hands! She might as well use it to see if Kristen’s a match for Mickey.

It should be simple enough to get a Mickey sample and make this DNA test happen. Of course, Days fans know soap lab results are often tampered with! It’ll be interesting to see if the upcoming results confirm Nicole’s suspicions or leave her thinking she got it wrong. Either way, Mickey is indeed Rachel and that news will have to come out eventually. Stay tuned to see when the baby updates will strike.

It sounds like some fantastic twists and turns are ahead on DOOL. Don’t miss all CDL’s Days of Our Lives spoilers! As other Days updates pop up, we’ll have more news and scoops to share.