Days of Our Lives Spoilers: Maggie Heads to Prison for Killing Adrienne – Tearful Goodbye Leaves Victor and Family Behind 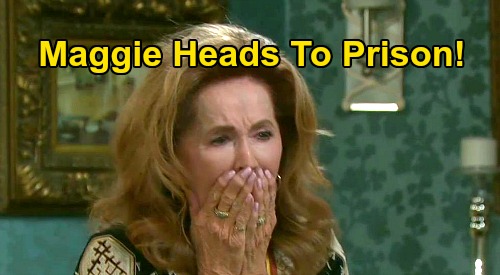 Days of Our Lives (DOOL) spoilers tease that Maggie Kiriakis (Suzanne Rogers) will stand her ground. She feels horrible about causing the death of Adrienne Kiriakis (Judi Evans), but she’s trying to do the right thing. Maggie can’t undo the damage, but she managed to get Will Horton (Chandler Massey) off the hook and intends to enter a guilty plea in court.

Of course, Victor Kiriakis (John Aniston) will make a last-ditch effort to stop Maggie. He’s got friends in high places and could possibly help Maggie avoid prison. Victor could at least give Maggie an excellent legal defense team and order them to give it their best shot. If that didn’t work, Victor could bribe the judge or jet Maggie off to an island somewhere. He just wants to be with the woman he loves!

However, Maggie will insist that she did the crime and must do the time. During the week of March 16-20, Days of Our Lives spoilers state that Maggie will be ready to say goodbye to her loved ones and head to Statesville. She’ll likely get a sweet farewell scene with Sarah Horton (Linsey Godfrey) and hopefully Mackenzie “Mickey Horton, too.

Even Xander Kiriakis (Paul Telfer) will probably want to get in on the goodbye love fest. After all, Xander only wanted to protect Maggie from the awful knowledge of what she did. He worried Maggie couldn’t survive the blow of killing Adrienne and her grandchild, which is partly why the baby swap happened.

Xander also didn’t want Sarah to suffer, so he helped Victor and did what he had to do. As for Victor, he’ll get the most powerful goodbye of all with Maggie. It’ll break Victor’s heart to watch Maggie begin her lengthy sentence, but her mind will be made up. Victor’s desperate plea isn’t going to matter.

Days of Our Lives spoilers say Victor and Xander will remain concerned about Maggie’s fate. Prison is a rough place – just ask Gabi Hernandez (Camila Banus)! During one of Gabi’s stints behind bars, she was beaten to the point that she can no longer have children. Ben Weston (Robert Scott Wilson) also got stabbed while he was locked up, so bad things tend to happen when Salemites are incarcerated.

Naturally, there’s also the fear that Maggie will simply lose the will to carry on. She’s bound to struggle while she’s at Statesville, especially once this baby swap shocker gets out. Maggie will already be locked up when she learns the real Mickey – her own precious granddaughter – is dead because of her drunk driving.

That just might be enough to send Maggie over the edge! Days spoilers say Xander and Victor will do whatever they can to prevent Maggie from getting updates. They won’t want to make the devastation any worse, but it seems inevitable as this DOOL baby bomb spreads.

On the bright side, some big Days twists are coming up that could improve Maggie’s outlook. As other news comes in, DOOL fans will want to pop back in. CDL will have all the hottest Days of Our Lives spoilers, news and updates to pass along.