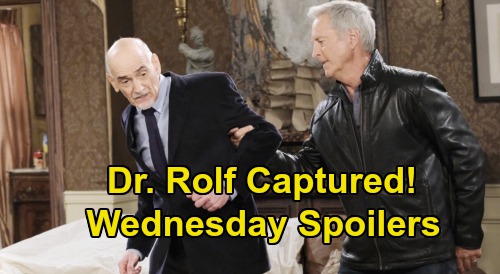 Days of Our Lives (DOOL) spoilers for Wednesday, March 11, tease that Chad DiMera (Billy Flynn) will move in for the kill. He just grabbed a letter opener and has every intention of murdering Kate Roberts (Lauren Koslow), but John Black’s (Drake Hogestyn) arrival will stop him in his tracks. After capturing Dr. Wilhelm Rolf (William Utay), John will drag him in the DiMera mansion and derail Chad’s plan.

Next, John will lead Dr. Rolf to the police station – and Chad won’t be far behind. Days of Our Lives spoilers say Chad will make an interesting pitch on Wednesday. He’s under Stefano DiMera aka Steve Johnson’s (Stephen Nichols) dark spell right now, but we’ve seen him trying to fight back. Chad initially struggled when he was about to smother Gabi Hernandez (Camila Banus), so he’s still in there.

Ciara and Shawn will remain hopeful that their mom’s going to come back to them. They can’t bear the idea of never talking to the real Hope again. However, Days of Our Lives spoilers and updates say Princess Gina will shut down that idea. She’ll be adamant that Hope’s never returning and insist they should get used to it.

Of course, Princess Gina won’t know Dr. Rolf’s on the verge of agreeing to remove her chip. She’s in for a rude awakening, so stay tuned for more drama. In the meantime, Rafe Hernandez (Galen Gering) will get some troubling news. Evan Frears aka Christian Maddox (Brock Kelly) will achieve a legal win, which will leave Rafe furious and more determined to get answers.

Unfortunately, Evan will keep a tight lid on where David Ridgeway (Caleb and Kyler Ends) is and who he’s with. His confession will likely be thrown out, but that’ll only strengthen his resolve to hide the truth and try to keep his son. Days spoilers confirm Orpheus (George DelHoyo) is Evan’s father and the secret ally who’s helping him, so some shockers will unfold by the end of the week.

It sounds like some exciting scenes are coming up. As other news rolls in, don’t miss all our DOOL updates. CDL will have lots of Days of Our Lives spoilers and details to deliver, so be sure to drop by often.