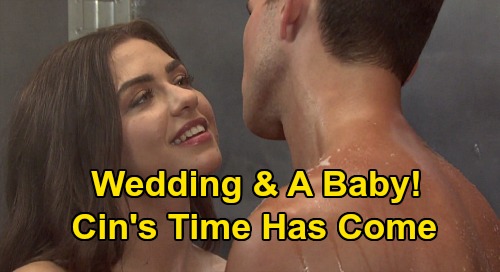 Days of Our Lives (DOOL) spoilers tease that Ben Weston (Robert Scott Wilson) and Ciara Brady (Victoria Konefal) are in for some great times ahead, and it’s about time. As DOOL viewers know, Ben has been wrongly imprisoned for the murder of his sister Jordan Ridgeway (Chrishell Stause), but that’s finally about to come to an end. After a terrible saga that included nearly being executed for the crime, Ben will finally be released from prison.

This is great news for “Cin” fans, who have been looking forward to a Ciara and Ben reunion for a long time now. Well, according to Days of Our Lives spoilers, Ciara and Ben will enjoy some nice scenes together, which should absolutely thrill “Cin” fans.

In fact, the newest DOOL promo shows Ciara happily jumping into Ben’s arms at the Salem PD after he’s released from Statesville, then later shows some pretty intense love scenes, so it looks like they’ll make the most of their reunion.

And according to ongoing DOOL spoilers, Ben and Ciara will soon thereafter have a talk about their future. Certainly, they’ll have a lot to discuss. Ben will need to think about rejoining the workforce in some capacity, and Ciara will probably want to consider whether she wants to continue on with her work at Titan for Victor Kiriakis (John Aniston).

Who knows – maybe Ben could even go to work for Victor in some capacity. Or it that would be too much, he could always team up with Will Horton (Chandler Massey) as an investigative reporter at the Spectator – after all, he and Will are decent friends ever since their stint in prison together.

We could also imagine Ben being a great private detective with Black Patch, if John Black (Drake Hogestyn) would have him.

Those will be big decisions, but we have a feeling that there could be more that Ben and Ciara will need to discuss. For example, it might be time for Ben and Ciara to talk about their personal future together as a couple – and this means engagement, marriage and a possible baby.

Now that they’ve been forced to be apart and Ben was nearly executed, they probably won’t want to waste any more time. Might we see a Ben and Ciara wedding in 2020?

We think that it’s a likely possibility, as TPTB at DOOL have hinted in their spring previews that Ben and Ciara will be talking about the next logical step in their relationship.

And of course, if a wedding is in the near future, then could a “Cin” baby be far behind? It would certainly make a lot of DOOL viewers happy if Ben and Ciara settled down and ended up with a baby on the way!

We’ll see what happens, but we suspect that a Ben and Ciara wedding could be coming in 2020. Do you think that Ben and Ciara will be getting engaged soon? Do you want to see a #Cin bun in the oven? Keep watching DOOL and remember to count on CDL for frequent updates on all the latest Days of Our Lives news and spoilers.