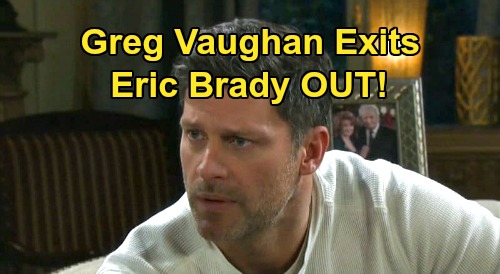 Days of Our Lives (DOOL) spoilers tease that another major exit is on the way. It seems like the losses just keep coming! DOOL’s latest departing actor is Greg Vaughan (Eric Brady), who revealed his upcoming exit on an episode of Steve Burton (General Hospital’s Jason Morgan) and Bradford Anderson’s (GH’s Damian Spinelli) podcast.

Vaughan wrapped filming before the shutdown, so he admitted his reign at Days was over. The popular DOOL star also confirmed that he’s back at Queen Sugar on OWN. Vaughan suggested he just felt his time at Days of Our Lives was coming to an end. However, Vaughan added that “it’s never over” and left viewers with some hope.

There’s no word yet on how Eric will exit, but Days insiders claim there won’t be much of one. It could be a case where Eric simply stops appearing and then an explanation comes later.

A recast is also possible, but Vaughan seemed to hint the door would be open for his own return. This sounds like a tricky situation, so we’ll let you know when we hear more details.

Regardless, it looks like Eric’s new wife, Nicole Brady (Arianne Zucker), will remain on the show. Of course, plans could change following the shutdown, but it appears Zucker was still filming when Days was forced to suspend production back in March.

It’ll be interesting to see exactly how DOOL handles this since Eric and Nicole are just now entering their blissful honeymoon period.

Days of Our Lives spoilers don’t point to some explosive breakup, so it might even be a case where they’re forced to do long-distance for a while. That might work until Days can figure out a new plan.

Then again, there could be some other rushed explanation for why Eric’s no longer on screen. Whatever the case, it seems like Nicole’s sticking around for now.

We’ll pass along updates as other Days news pops up. Will you miss Greg Vaughan as Eric Brady? What do you think about all these major exits at DOOL? CDL’s where you want to be for sizzling Days of Our Lives spoilers, updates and news posts, so don’t forget to stop by regularly for the hottest details.