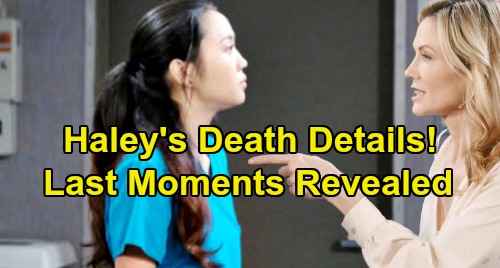 Days of Our Lives (DOOL) spoilers reveal that it’s time to talk about a deadly shocker – one that the show hasn’t given that much attention to. We’ve heard plenty about Adrienne Kiriakis’ (Judi Evans) tragic demise – and a lot about Jordan Ridgeway’s (Chrishell Stause) murder, too. However, there hasn’t been much focus on Haley Chen’s (Thia Megia) sudden death.

JJ Deveraux (Casey Moss) has struggled over the loss, but Days hasn’t divulged a ton of details about that loss yet. We know Kristen DiMera (Stacy Haiduk) pushed Haley down a flight of stairs after learning her baby died, but what led up to that horrifying moment? What played out in the moments right after?

During the week of January 20-24, DOOL fans will get some firm answers. Days of Our Lives spoilers say some special flashback episodes will reveal what put Haley in that terrible position. Here’s what actually went down and why Haley met a grim fate.

Xander Kiriakis (Paul Telfer) brought Sarah Horton’s (Linsey Godfrey) baby into the world after a car accident – the same one that killed Adrienne. Drunk Maggie Kiriakis (Suzanne Rogers) was behind that accident, which is why Xander and Victor Kiriakis (John Aniston) pinned it on Will Horton (Chandler Massey).

Sadly, Sarah’s baby ended up fading fast after arriving at the hospital.

Once Xander and Victor realized Sarah’s baby was dead, the switch was set in motion. Victor gave the greenlight, which led Xander to hand Sarah the little girl that belonged to Kristen.

That’s when Haley entered the picture. She was on duty as a nurse that night, so she appeared and seemed on edge. Kristen sensed that something was wrong, but Haley wouldn’t fess up.

After Haley insisted the doctor would be in to speak with her soon, Kristen wouldn’t accept that answer. She flew into a rage, got out of her hospital bed and followed Haley out into the hallway.

DOOL viewers know Kristen can be pretty unhinged at times. Haley was undoubtedly terrified of what Kristen might do to her, so she did her best to get away. Unfortunately, that decision backfired big time. Kristen kept pushing and pushing to find out happened to her baby.

After Haley blurted out that Kristen’s child didn’t make it, Kristen reacted and shoved Haley – who was by the stairs at that point. Haley fell to her death, which put Kristen in an almost catatonic state.

Kristen got back in her hospital bed and struggled to even remain in the conscious realm. Kristen was just like a zombie sitting there, so Brady ultimately put it all together and was horrified.

As for JJ, he got the devastating news of Haley’s passing from Abigail DiMera (Kate Mansi), which put him on the vengeful path we’ve seen him try to overcome. Days of Our Lives spoilers say the upcoming flashbacks will bring some gripping scenes, so stay tuned. We’ll give you updates as other Days details emerge. Stick with DOOL and don’t forget to check CDL often for the latest Days of Our Lives spoilers, updates and news.