Days of Our Lives Spoilers: James Scott Says No To EJ DiMera Return – Claims Never Coming Back To Hollywood 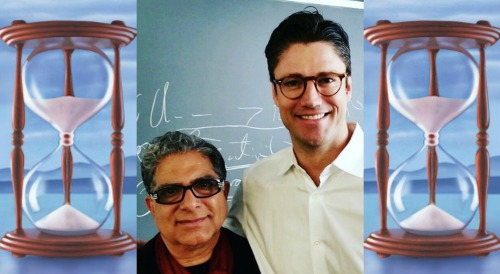 Days of Our Lives (DOOL) spoilers has some news to pass on about a former star of the NBC soap. There’s been a lot of talk lately about whether EJ DiMera (James Scott) will be returning to the show in the future.

Of course, it’s natural to wonder such things, especially since Sami Brady DiMera (Alison Sweeney) was recently back on the show for a stint recently, she cares for a still-ailing EJ in Europe and will be returning soonish.

But recently, James Scott, who portrayed EJ from 2006-2014, made it crystal clear that he was not ever going to return to the role. Back in 2014 after James left Days of Our Lives, his life took a turn away from acting after he visited an Indian meditation center.

James now runs a website called “The Whisper Within” and he promotes medication and a more self-conscious way of life.

Well, recently, James posted a photo of himself with Deepak Chopra, along with the following caption: “To follow your heart is to never know where you will be led, that is the beauty of its mystery. It was a pleasure to spend a morning teaching with Dr Chopra.”

Among the replies to James’ post was a Days of Our Lives fan, who wrote: “James, we miss you!!!! Call Days and come back with Sami!” James was kind enough to reply to the fan, but his answer wasn’t exactly what the person wanted to hear.

Fans had various reactions to that definitive statement. One person said: “You are SO missed!!!” Another commented: “Just a TV show. You were great on there.

But it seems like you have found something much more fulfilling and profound in your life.” Someone else said: “I am glad you found peace and happiness outside of acting and Hollywood.”

Finally, the person who wrote the initial reply weighed back in, saying: “Oh wow, had no clue you wanted nothing to do with acting all together…but I guess that explains why I haven’t seen you on anything in a long time. Sorry to hear that…thought maybe there would be a small chance you might come back to Days. You’re such a great actor, but you do what makes you happy.”

So, there’s good news and bad news here. It seems that James is happy and doing something that he absolutely loves and that gives him great peace.

The bad news for fans is that EJ DiMera’s not going to return in the form of James Scott. Of course, there’s always the possibility that the role could be recast if TPTB decide to let the character of EJ make a recovery in the future.

We’ll see what happens with the character of EJ down the line. As you might know, Sami will be returning to Days of Our Lives in the days to come, so whether EJ remains in Europe for the duration of Sami’s return or whether he comes with her in the form of a new actor remains to be seen.

We’ll keep you updated with any new developments on that front! Stay tuned to the NBC soap and don’t forget to check CDL frequently for the latest Days of Our Lives spoilers, daily episode recaps, and news.

To follow your heart is to never know where you will be lead, that is the beauty of its mystery. It was a pleasure to spend a morning teaching with Dr Chopra.