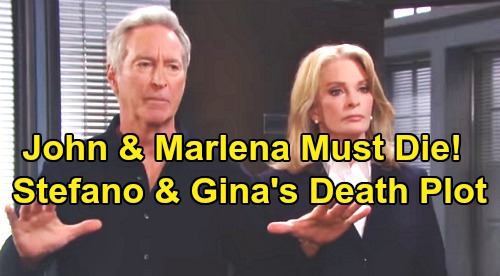 Days of Our Lives (DOOL) spoilers tease that Princess Gina Von Amberg aka Hope Brady (Kristian Alfonso) will call for a strategy session. She’ll come together with Stefano DiMera aka Steve Johnson (Stephen Nichols) so they can come up with a new plan. Princess Gina won’t think they’re ever going to make progress if they keep doing what they’re doing. Their plots have obviously proved futile so far.

Princess Gina wants John Black (Drake Hogestyn) for herself, but Marlena Evans (Deidre Hall) owns his heart. As long as Marlena is living and breathing, John’s always going to want her.

Marlena feels the same way about John, which leaves Stefano with a similar problem. As long as John’s alive, DOOL fans know Marlena will remain devoted to him.

During this crucial meeting, Princess Gina will reveal what she feels is the only solution. She’ll tell Stefano that Marlena must die, which should leave him outraged at first.

If Stefano can’t have Marlena, he certainly won’t want Princess Gina to have John. Days spoilers say they’re supposed to be in this together.

However, a real death isn’t exactly what Princess Gina has in mind. She’ll mull over a new scheme with Stefano, which will lead him to the conclusion that John must die as well – just not in the way most people think about.

It sounds like Stefano wants John to believe Marlena’s dead so he can on with his life. Meanwhile, Princess Gina will want Marlena to believe John’s dead and do the same.

Now that’s clearly going to tough tactic to pull off, but Princess Gina and Stefano will be awfully determined! Days of Our Lives spoilers say the devious duo will work out all the details.

Part of this strategy involves luring John away from Salem. “Steve” will lead John on a pointless hunt for Stefano elsewhere, which should give Princess Gina a chance to take care of Marlena.