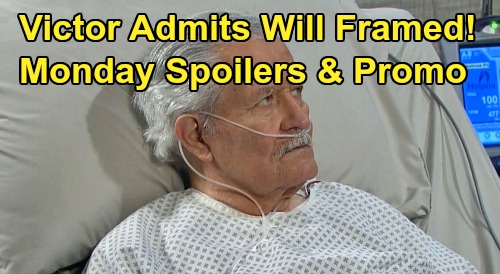 Days of Our Lives (DOOL) spoilers for Monday, January 13, tease that Clyde Weston (James Read) will try to convince Ben Weston (Robert Scott Wilson) to break out of prison. He just suggested the idea since Ben lost his last appeal and is facing death, but Ben will undoubtedly balk. However, Clyde won’t see what Ben has to lose. He’ll hope he can make Ben see things his way and agree to this father-son escape mission.

Ben will most likely shut Clyde down and accept his fate, but Ciara Brady (Victoria Konefal) will hold out hope that Ben’s life can be saved. Unfortunately, Ciara will face a huge setback in Monday’s DOOL episode.

Victor Kiriakis (John Aniston) just decided it’s time for Ciara to know the truth. He’s ready to come clean about what really happened – and it’s not what Ciara thinks.

Days of Our Lives spoilers say Victor will admit an innocent man was indeed framed. He’ll quickly clarify that he set up Will Horton (Chandler Massey) with Xander Kiriakis’ (Paul Telfer) help.

Victor and Xander were never involved in framing Ben at all. They were too busy trying to cover up Maggie Kiriakis’ (Suzanne Rogers) involvement in Adrienne Kiriakis’ (Judi Evans) accident.

Ciara will be appalled with Victor and Xander for putting Will behind bars, but she’ll also be heartbroken over Ben’s situation. She’s been following the wrong trail for months and is no closer to solving this mystery. It’ll leave Ciara frustrated and fearful that there’s no time to figure this mess out, but she won’t give up.

Other Days of Our Lives spoilers say Hattie Adams (Deidre Hall) will cause issues for Kate Roberts (Lauren Koslow). It sounds like Hattie will remain nosy when it comes to Kate and “Steve Johnson” aka Stefano DiMera’s (Stephen Nichols) connection.

They sold Hattie a bogus story, but Hattie’s the kind of gal who likes to pester and prod. She’s bound to keep asking tricky questions that could leave Stefano’s plot in jeopardy.

Speaking of Stefano, Days spoilers say he’ll share a sweet reunion with Kristen DiMera (Stacy Haiduk). Stefano just revealed his true identity to Kristen – and she seemed to believe him when she looked in his eyes.

Nevertheless, Kristen will have to learn how this is even possible. Stefano will spill the whole wild story and recruit Kristen to help him like a loyal daughter should.