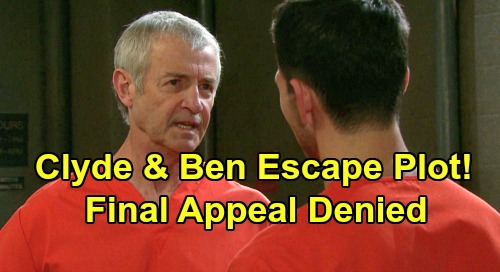 Days of Our Lives (DOOL) spoilers tease that some horrible news is coming up for Ben Weston (Robert Scott Wilson). Sadly, it looks like Ben’s final appeal won’t go his way. Ben should be heartbroken when he realizes he’ll indeed face the death penalty and has no future with Ciara Brady (Victoria Konefal). He’ll do his best to accept his fate, but Clyde Weston (James Read) will have another idea.

DOOL fans know things got tense between Clyde and Ben after that attempted attack on Will Horton (Chandler Massey). Clyde planned to stab Will until Ben fought his father off. Ben took a shive to the abdomen instead and ratted Clyde out, so Clyde obviously wasn’t too happy about that!

Even so, Clyde doesn’t want to see Ben put to death. His love for his son is twisted, but it’s all that a guy like Clyde can offer. Days of Our Lives spoilers say Clyde will pitch his plan to Ben. Since Ben will be out of legal options, Clyde will hope he’ll be more open to breaking the rules.

Clyde will insist there’s still a chance for Ben to reunite with that pretty little lady of his. He’ll think the justice system has failed Ben, so it’s time to throw the rulebook out the window. Days spoilers say Clyde will propose a father-son escape. He’ll think if they tackle this project together, there’ll be no stopping them.

Of course, Ben’s bound to have some reservations about that. For starters, Ben may not want to drag Ciara into a life on the run, which is what they’d be facing. Ben would be a fugitive, so they’d always have to look over their shoulders. He may think Ciara would be better off letting him go and moving on with someone new.

Plus, Ben knows Clyde is dangerous and capable of anything. Clyde deserves to be rotting in prison, so Ben might worry about the consequences of his dad’s getaway. You can bet Clyde would wreak havoc as usual!

Once Ben hears Clyde’s pitch and gets updates from Ciara, he’ll have a big decision to make. Will Ben flee – at least long until for the real culprit to be found? Will Ben accept this unfair punishment and get a last-minute reprive instead?