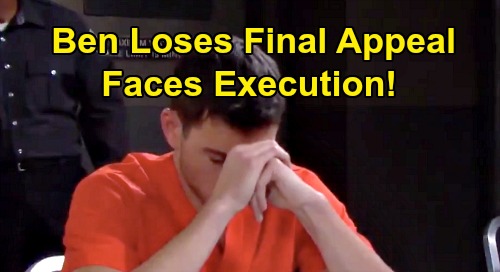 Days of Our Lives (DOOL) spoilers tease that Ciara Brady (Victoria Konefal) is going to have a terrible week. DOOL spoilers for the week of January 6 say that she’ll be anxiously awaiting the outcome in Ben Weston’s (Robert Scott Wilson) appeal hearing.

It will be Ben’s final appeal for the murder of his sister Jordan Ridgeway (Chrishell Stause). Ben didn’t do it, but all the evidence points directly to him, and with his murderous history, he’s facing the death penalty if the appeal gets denied.

So Ciara’s got that on her mind, but then she’ll face tragedy when her grandfather Victor Kiriakis (John Aniston) suffers a stroke as she’s confronting him about being responsible for framing Ben for a murder he didn’t commit. Ciara will be beside herself as she tries to rouse Victor when he falls unconscious from a stroke during their confrontation.

Well, ongoing Days of Our Lives spoilers indicate that Victor didn’t frame Ben for Jordan’s murder, and that he actually framed Will Horton (Chandler Massey) in connection with the death of Adrienne Kiriakis (Judi Evans).

But Ciara won’t know that, and she’ll apparently persist in the belief that Ben was framed by Xander Kiriakis (Paul Telfer) and Victor in order to get him out of her life.

Of course, since she and Ben don’t realize that Xander and Victor didn’t actually frame him for murder, they’ve failed to pursue other leads as to who might have killed Jordan. And things will get critical, as Ben’s appeal hearing barrels forward.

As viewers know, Justin Kiriakis (Wally Kurth) is on the case, and he’s shown in the DOOL weekly promo making a passionate argument for why Ben doesn’t deserve the death penalty.

Hopefully, Justin will be able to persuade the judge, but it’s always a crap shoot when it comes to judges – Ben could be assigned a judge who’s sympathetic, or one who really has it out for Ben.

Unfortunately, Days spoilers say that by week’s end, Ciara will go to Ben with some terrible news. Could she be the one to tell him that his appeal has been denied and he’s officially stuck on death row for good?

Of course, there could be more bad news attached to the decision as well. On soaps, when someone’s on death row, the actual execution tends to happen remarkably quickly, so we could see Ben get the news that not only was his appeal denied, but that the date of execution is looming! That would certainly be terrible news.

But there could be a ray of hope here. If the truth about Xander and Victor framing Will for Adrienne’s murder actually comes out soon, then Ciara may have another avenue of investigation to pursue for Jordan’s real killer.

But will Ciara have enough time to investigate Jordan’s murder, or will Ben’s date of execution be set for the near future? Who do you think killed Jordan? Stay tuned to DOOL and don’t forget to check CDL often for the latest Days of Our Lives spoilers, updates, and news.