Days of Our Lives Spoilers: Gabi’s World Comes Crashing Down – Who Destroys Her Evil Reign?

BY hellodrdavis on January 6, 2020 | Comments: one comment
Related : Days of Our Lives, Soap Opera, Spoiler, Television 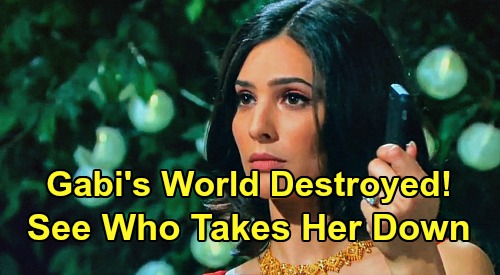 Days of Our Lives (DOOL) spoilers tease that Gabi Hernandez’s (Camila Banus) luck may soon be running out. As DOOL viewers know, she’s been at the helm of DiMera Enterprises for a year now, ever since Stefan DiMera (Brandon Barash) died. Gabi seems to have everything going her way, given her reign over the company and her successful manipulation and blackmail of Lani Price (Sal Stowers). Gabi’s in a relationship with Eli Grant (Lamon Archey), and she seems to have everything she wants.

But Gabi’s good fortune probably isn’t going to last long. She’s only a DiMera by marriage, and her husband is long gone. It seems like there will soon be a slew of people coming for her position as the leader of DiMera Enterprises, and that’s got us wondering who might ultimately be the person to bring Gabi down and remove her from her position as DiMera Enterprises’ top dog.

First and foremost, it seems that Lani could have a lot to do with Gabi’s ultimate downfall. After all, Lani has a major score to settle. Gabi forced her to dump Eli at the altar, or else she’d literally blow up Julie Williams’ (Susan Seaforth Hayes) heart.

Lani complied in order to save Julie, and she’s still keeping the awful secret about what Gabi did to her.

But that could soon change. According to Days of Our Lives spoilers, Lani will confide in JJ Deveraux (Casey Moss) about what Gabi did to her, and about the ongoing threat that Gabi still poses to Julie.

With JJ’s help, Lani might be on the verge of exposing Gabi’s blackmail, and that could ultimately cause the DiMera board to kick her out for ethical reasons.

Stefano is distracted right now by his blinding love for Marlena Evans (Deidre Hall), but we can imagine that his attention will sooner or later turn to his family company. Stefano used to rule over DiMera Enterprises with an iron fist, and it doesn’t seem like he would be too comfortable with Gabi being in control of the company.

Well, according to DOOL spoilers, Stefano will soon show up on Kristen’s doorstep, which should be a shock since he’s in Steve Johnson’s (Stephen Nichols) body. It looks like Kristen will soon learn that her father is back in action as “Steve” and he’ll want to test her loyalty in some way.

That could mean that he has some test for her, and it might involve DiMera Enterprises in some way.

Gabi has been after Kristen for her DiMera shares for a while now, and Stefano probably knows this, since Stefano seems to know everything there is to know about DiMera Enterprises.

Perhaps he will enlist Kristen to somehow bring Gabi down, since Stefano can’t really do it himself – after all, he has to keep playing the role of Steve. A Kristen vs. Gabi fight would definitely be worth seeing!

Of course, we can’t count out Chad DiMera (Billy Flynn) and Abigail DiMera (Kate Mansi) as contenders for bringing Gabi down.

They’ve long known that something is off with Gabi and Eli as a pairing, but of course they don’t know that Gabi finagled her relationship with Eli after blackmailing Lani. If they were to find out that information, it could be explosive, and Chad could go to the board with the information.

It’s a bit surprising that Chad hasn’t taken over as DiMera’s CEO from Gabi, especially since he’s Stefano’s direct blood relative. DOOL spoilers indicate that a face-to-face meeting between Stefano and Chad is forthcoming at some point, so perhaps Stefano will want Chad to take action against Gabi.

Of course, Chad might have some moral qualms about Stefano being in Steve’s body, so that could pose an obstacle.

One thing seems pretty certain, and that’s that Eli is going to be furious when he finds out about how Gabi has threatened his grandmother Julie’s life for over a year. He’ll probably flip when he finds out that she can control Julie’s heart rate with an app on her phone, and that she was responsible for Lani dumping him at the altar.

If the truth manages to find its way to Eli, then he could singlehandedly be the one to destroy Gabi’s good fortune and her reign at DiMera Enterprises. All he’d need to do is go to Mr. Shin (Michael Hagiwara) and tell him what Gabi is capable of, he could see to it that Gabi is relieved of her duties.

In many ways, it would be most fitting for Eli to be the one to bring Gabi down. At any rate, one of these days we’ll see Gabi fall, and it looks like she’s going to fall hard.

Gabi’s got a lot to lose – her position as CEO, her company GabiChic, and her relationship with Eli. Who do you think will ultimately bring Gabi down? Stay tuned to DOOL and don’t forget to check CDL often for the latest Days of Our Lives spoilers, updates, and news.