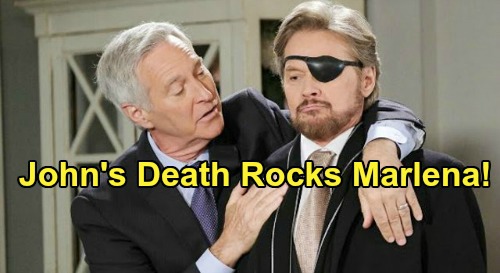 Days of Our Lives (DOOL) spoilers tease that Princess Gina Von Amberg aka “Hope Brady” will put her part of the plan in motion. DOOL fans know Princess Gina’s in cahoots with Stefano DiMera aka “Steve Johnson” (Stephen Nichols). They settled on a plot to fake John Black’s (Drake Hogestyn) death as well as Marlena Evans’ (Deidre Hall), but things are bound to get out of hand!

Of course, Princess Gina will have to set a trap before she can carry out this scheme. She’ll do her best to lure Marlena into it, which won’t be an easy task. DOOL fans know Marlena doesn’t trust “Hope,” so she should be wary of any suggestions she makes.

Nevertheless, Princess Gina won’t give up. She’s got a lot riding on this strategy, which may be her last shot at being with John. Speaking of John, he’ll be busy on a wild goose chase with “Steve.”

Stefano’s standing right in front of him, but John doesn’t have a clue. He’ll believe they’re hunting Stefano down, but this is all a way to lure John into a trap of his own.

Days of Our Lives spoilers say Princess Gina will run into a hurdle or two. She’ll be pretty unsettled by Shawn Brady’s (Brandon Beemer) return to town, which is coming up during the week of January 27-31. Princess Gina knows Shawn has some history with Princess Gina, so he may pick up on some clues that others have missed.

Kate Roberts (Lauren Koslow) will also be a problem for Princess Gina, who’ll get grilled about whatever she’s planning. Days spoilers say Kate will think the danger is very real. She’ll worry that Princess Gina could go too far and actually kill her target!

However, that’s genuinely not what Princess Gina has in mind. After all, Stefano would retaliate if Princess Gina truly murdered Marlena. He would kill John just to spite Princess Gina, so it’s in her best interest to keep Marlena alive.

Days of Our Lives spoilers say “Steve” will fulfill his part of the plot first, so that’ll bring Marlena’s shocker. “Steve” will tell Marlena that John’s dead, so this is sure to be a crushing blow.

Since Marlena’s a smart cookie, she may ultimately have doubts about this so-called death – and suspicions about “Hope” and “Steve’s” alliance. You can bet Marlena’s going to demand some answers eventually.

It sounds like some hot drama’s looming on the NBC soap. We’ll give you updates as other Days news comes in. Stay tuned to DOOL and don’t forget to check CDL often for the latest Days of Our Lives spoilers, updates and news.