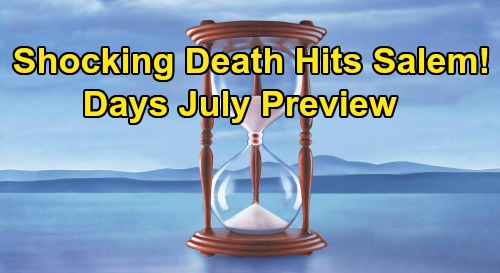 Days of Our Lives (DOOL) spoilers reveal that there’ll be an exciting theme that plays out during the month of July. According to Soap Opera Digest, DOOL’s doing four weddings and a funeral! This theme will pave the way for some romantic moments and obviously sets up the potential for a shocking death. Let’s unpack what this “four weddings and a funeral” theme really means.

For starters, let’s talk about those weddings. Ben Weston (Robert Scott Wilson) recently proposed to Ciara Brady (Victoria Konefal), so that’s one wedding that’s set to happen this summer. There’ll be some delays and wedding plan hurdles though, so don’t expect Ciara and Ben to tie the knot first.

Just because they were the first couple to get engaged doesn’t mean the “Cin” nuptials will happen before the others. It’s not a race, so expect the engagement period to last a little longer than some of the other duos.

Next, Eric Brady (Greg Vaughan) will propose to Nicole Walker (Arianne Zucker), which will set up another wedding for this “four weddings and a funeral” theme.

“Ericole” fans have been waiting patiently for their favorite couple to finally get married – and they will! Days of Our Lives spoilers confirm Nicole and Eric will ultimately become husband and wife.

However, we’ve got two more weddings to talk about, so let’s keep things moving along. Days spoilers state that Lani Price (Sal Stowers) will accept Eli Grant’s (Lamon Archey) proposal. A surprise pregnancy will complicate their next chapter, but it looks like “Elani” will tackle the crisis and keep their wedding plans on track.

Days of Our Lives spoilers say Justin Kiriakis (Wally Kurth) will also get down on one knee soon, so that brings us up to wedding number four. Justin and Kayla Brady (Mary Beth Evans) can focus on their looming nuptials, but Steve Johnson’s (Stephen Nichols) lingering love for Kayla might present some obstacles.

These weddings will play out in July – one a week as we build to that funeral we mentioned. No matter what order these couples get head to the altar, this month-long wedding extravaganza will culminate in some funeral drama.

Who’s going to die?! That’s tough to say considering since the major exits we know of are accounted for and will happen much sooner or later. There’s no confirmation on Orpheus’ (George DelHoyo) exact fate, but it’s looking like prison may be where he ends up – perhaps as early as next week.

Besides, it’s tough to believe anybody besides Zoey Burge (Alyshia Ochse) would even consider showing up for Orpheus’ funeral – and even Zoey would be iffy.

Zoey isn’t sticking around either, but she presents the same problem. Would Zoey really be worthy of a funeral if DOOL killed her off? It doesn’t seem like it, so Days may take another route here.

It sounds like more info is needed as we move toward someone’s funeral service, but this July preview brings some interesting topics to ponder! As other DOOL news and updates come in, we’ll provide the latest details.